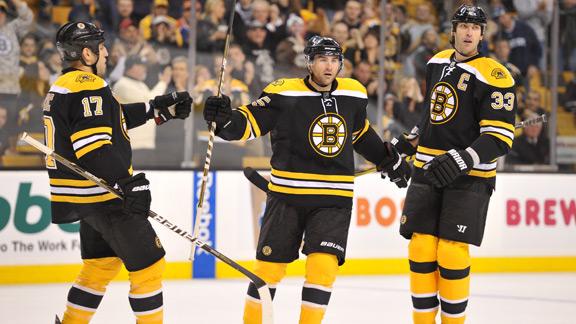 Deuces Wild – Bruins Pot 2 in Each Frame, Deal Loss to Upstart Oilers
written by Nathan Simpson
They say that good things come in pairs, and on Thursday in Boston, ‘they’
couldn’t have been more right. The Bruins held all the cards in their 6-3 win over the
Edmonton Oilers in front of a full house at the TD Garden. Thursday’s tilt showcased
two future superstars, Edmonton’s Taylor Hall and Boston’s Tyler Seguin, who battled
for the second time since being drafted first and second overall respectively in 2010.
Tuukka Rask, coming off his first win of the season Monday versus the Islanders, was in
goal again for the Bruins, playing in back-to-back games for the first time since last
February. Two U’s, two K’s, and two wins later, the Bruins have extended their winning
streak to four games, getting back to the .500 mark for the first time since the second
game of the season. Boston spread their scoring out evenly, lighting the lamp twice in
each period. The offense seems to be making up for lost time as they have now scored
24 goals in the last 4 games after managing only 22 (21 if you don’t count their
shootout ‘goal’) through the first ten. Special teams continue to play a factor in Boston’s
remarkable turnaround. The B’s struck twice on the powerplay which is operating at a
healthy 33% (5 for 15) for November.

Brad Marchand broke out of a nine game scoring slump with a pair of goals,
and Seguin maintained his hot hand with a two point night (1G, 1A). Defenseman Joe
Corvo had his best game in a Bruins sweater adding three helpers and finishing +1 in
19:50 of ice time. It’s taken Corvo some time to adjust to his new surroundings, but
recently he has shown significant improvement in his game. Rounding out the scoring,
Lucic picked up his eighth, Boychuk his second, and Jordan Caron got his first goal of
the season. Zack Hamill, in the lineup due to injuries to Dan Paille and Rich Peverley,
had a solid game, drawing two penalties and chipping in with an assist. Hamill, chosen
eighth overall by Boston in 2007, now has three points in five career NHL games. The
23 year old, Vancouver, BC native has played well in Providence, but hasn’t been able
to make the transition to the big leagues. Defenseman Andrew Ference left in the second
period with an undisclosed injury and did not return for the third. Coach Claude Julien
was mum on the details, saying only that it is a lower body injury ,and that he is unsure
how severe it is. Ference is listed day-to-day and will be replaced Saturday by Steven
Kampfer.

Thursday’s victory marked Boston’s tenth straight win over Edmonton, a streak
that dates back to November 6, 2001. It was the first time this season that the Oilers top-
ranked defense surrendered more than four goals in a game. The Bruins improved to 6-0-
0 on the season in games where they score three or more goals.
Saturday night the B’s welcome their Northeast Division rival the Buffalo Sabres
to The Garden. Buffalo currently sits in second place, 1 point behind Toronto, and 6 up
on Boston. The Bruins had exploded out of the basement, moving past Montreal, and
now trail Ottawa by just one point for third place in the division. Buffalo, meanwhile,
is riding their own four game winning streak, and are 5-1-0 on the road this season. The
game will be a duel between two of the league’s premier goaltenders, Tim Thomas and
Ryan Miller. As good as Boston’s offense has been, the defense will have to step up in
what, on paper anyway, should be a low scoring affair. The key to victory for the Bruins
is maintaining the consistent effort across the board that has led to their recent success.
As long as Boston continues to bring a full deck to the table, everything should keep
coming up aces.[endtext]