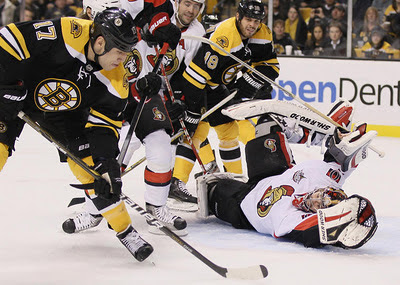 Movember Rein – Bruins Look to Shave Toronto’s Lead in the Northeast, Get Season Back on Track
written by Nathan Simpson


Tuesday night the Boston Bruins accomplished a rare feat in their defense of Lord
Stanley’s Cup. Not only did they celebrate the franchise’s 87th birthday with a 5-3 win at home,
but they did so by putting in a full 60-minute effort. This consistent level of play has been sorely
missing throughout the first month of the season, a month in which the B’s looked more like that
long forgotten team from 1924, who finished last in the six team league, than the Stanley Cup
Champions they are. The Bruins earned Tuesday’s victory, defeating an Ottawa squad that came
into The Garden as one of the League’s hottest. The Sens, a team most analysts picked to finish
at the bottom of the standings, hit the ice brimming with confidence. The ‘Cardiac Kids’ were
riding a six game winning streak that featured several exciting come-from-behind and shootout
wins. Boston rebounded with a complete-game-effort across all four lines. Twelve different
skaters registered points and each line contributed a goal. Ottawa’s top-ranked powerplay,
which came in operating at an absurd 41%, was completely shut down by Boston’s penalty
killers, managing only one shot on three opportunities. On the Boston side, the Bruins were able
to capitalize on the Sens’ poor penalty killing with Lucic adding a powerplay marker. Johnny
Boychuk scored his first of the year, and it was only the second tally on the season from the
Boston defense. Blueline production is dependent on the ability to establish a forecheck, of
which the Bruins did an excellent job. Boston outshot Ottawa 41-26, around a third of these
shots coming from the point.

It was a measuring-stick game for both sides, and given their early woes, it seemed like
almost a must-have for Boston. Last Saturday, the Bruins went into Montreal looking to right
the ship in the second half of a home-and-home with the Canadiens but were promptly swept by
their arch rivals in a 4-2 loss. Boston finished out the month of October reeling with a sub .500
record, going 3-7-0, getting off to their worst start since 2006. That year they opened up the
season 3-5-1, and toiled at the bottom of the Northeast throughout Dave Lewis’s lone season at
the helm, which saw a lacklustre Bruins team turn in a disappointing 35-41-6 campaign, missing
the playoffs for consecutive years.

To say that the Bruins have struggled is an understatement. NESN’s Dan Duquette Jr.
even jokingly suggested that bringing back playoff beards for ‘Movember’ might be the key
to turning things around. While it is easy to place the blame for Boston’s play on things like
a Stanley Cup Hangover, or the loss Mark Recchi’s leadership, or even a lack of facial hair,
the difficulty lays in finding a solution. Claude Julien has continually stressed that the biggest
problem is the team’s inability put forth a consistent effort, not just game-to-game but period-
by-period. For instance, last Thursday the B’s, energized by the home crowd, came out flying in
the first period but were unable to maintain that level of play, allowing the Habs, who went on to
win, back into the game.

The Bruins have also looked like a team facing an identity crisis – surprising considering
that they are icing essentially the same lineup they did at the end of last season. Boston, a blend
of talent and toughness, are playing like they can’t decide which team they want to be. Their inability to play with disciplined toughness shined through in an ugly loss to Carolina and again
last Saturday versus the Habs. The key to the Bruins’ success going forward is finding a way to
merge these two elements into one cohesive unit.

Coach Julien has said he’s seen some positives, but aside from the play of Tyler Seguin,
it’s hard to point them out. (The sophomore Seguin leads the team in scoring with 11pts (4G,
7A) and is a plus 8.) Besides a six-goal outpouring in an earlier meeting with the Leafs,
and the five they had versus the Sens, the offense has been almost completely snakebitten.
Powerforwards Nathan Horton and Milan Lucic have largely been invisible and really need to
step up their play. Horton recently admitted that he was still having trouble finding his game
since returning from his concussion. Offseason acquisition Benoit Pouliot has been a flop and
was a healthy scratch Monday night after missing two games with the flu. His spot in the lineup
may be in jeopardy as Jordan Caron has filled in quite nicely. Veteran defenseman Joe Corvo,
who filled the vacancy left by Tomas Kaberle, is a minus six through eleven games. Not even
the friendly confines of home have helped, as the Bruins have posted a dismal 3-5-0 record at the
TD Garden.

As they prepare to head into Toronto Saturday night, the B’s will have three days off to
build on what made them successful against the Sens. Speaking prior to Tuesday’s game, Julien
stressed the importance that quality practices will play in turning around the team’s fortunes. “If
the guys are cheating through drills, then you’re going to cheat through games”, he said. “I’ve
always told our players that you create habits in practice and that’s where it’s got to start so that
it becomes second nature in a game.” While one good practice followed by one good game
doesn’t get the team out of the cellar overnight, it is a step in the right direction. Their next step
takes them into The Big Smoke for the first time this season where last year the Bruins posted a
1-1-1 record at the ACC. Facing a Leafs squad that is tops in the NHL, Boston will have to show
a stiff upper lip, and not just a hairy one. Click here to check out the Bruins odds of defeating the 1st place Leafs. [endtext]