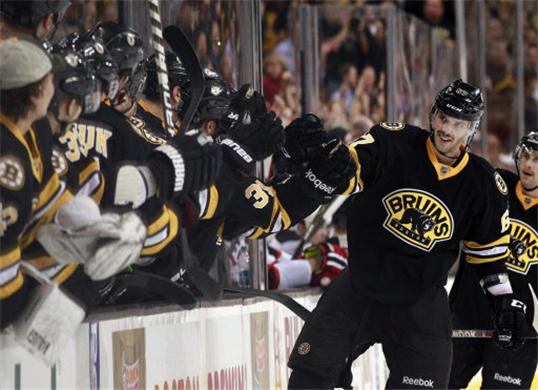 The Boston Bruins take to the ice tonight for the finale of a 5 game home stand, seeking to extend their winning streak to seven straight. Boston is coming off Tuesday’s hard fought 4-3
victory against the New Jersey Devils, a game which forward Milan Lucic described as
the “toughest battle that we’ve had.” While the Bruins’ top six forwards have led the way during
the current streak, Tuesday night saw important contributions coming from the third and fourth
lines, which notched three of Boston’s four goals, including Benoit Pouliot’s game winner,
which he slid past Devils netminder Johan Hedberg with 3 minutes to go in regulation. Pouliot,
who has been on a short leash with Bruins coach Claude Julien, responded with a solid effort
after being benched for Saturday’s matchup with the Buffalo Sabres. Gregory Campbell was
Boston’s best player on the night, setting up two goals, including Shawn Thornton’s first of the
season. The Sheriff, who has averaged 129 penalty minutes over the last 3 seasons, is coming
off a career year in which he set personal bests in goals (10), and points (20). The game was
largely a snooze-fest for the first two periods before finally opening up in the third. The teams
combined for five goals in the final frame, with four of them being scored in the opening seven
minutes. Brad Marchand began the offensive outburst, scoring just six seconds into the period
after Zdeno Chara sprung him on a breakaway off the opening draw. Marchand was benched in
the second for taking an undisciplined penalty in an attempt to get Devils forward Adam
Henrique to drop the gloves, which led to a New Jersey goal. Marchand got the message, and
responded with an inspired third period. Julien said he wasn’t surprised, saying that
Marchand “takes responsibility [for his actions] and when he’s given a chance, he answers
properly.” Marchand and the rest of the Bruins will have to find a way to keep up the intensity
as they prepare to face a lacklustre Columbus squad.

Tonight’s game marks the beginning of an important seven-day stretch in the season,
which includes road games against division rivals the Habs, and Sabres. A win tonight will bring
the fifth place Bruins within two points of the Sabres for first in a very tight Northeast Division,
where a mere four points separates first and last place. While all signs point to an easy Boston
win, Coach Julien said that they cannot risk overlooking their opponent. Speaking this morning
to reporters, Julien said that, as well as they have been playing, “there is no reason for us to be
taking the game lightly.” After all, not long ago the B’s were sitting next to Columbus down
at the bottom of the standings. And even with six straight wins, the Bruins still remain out of a
playoff spot. Tim Thomas was first off the ice in practice this morning and will likely get the
start for Boston. Andrew Ference, who left Saturday’s game with a lower body injury, is a game
time decision and there is a good chance that Dan Paille will be back in the lineup after breaking
his nose in last Monday’s game against the Islanders. Johnny Boychuk was the only Bruin not
in the morning skate, and is questionable for tonight with flu-like symptoms. After such a bad
start to the season, I doubt the Bruins will take this game lightly. Boston should easily sink
Columbus, and discover their seventh straight win.[endtext]