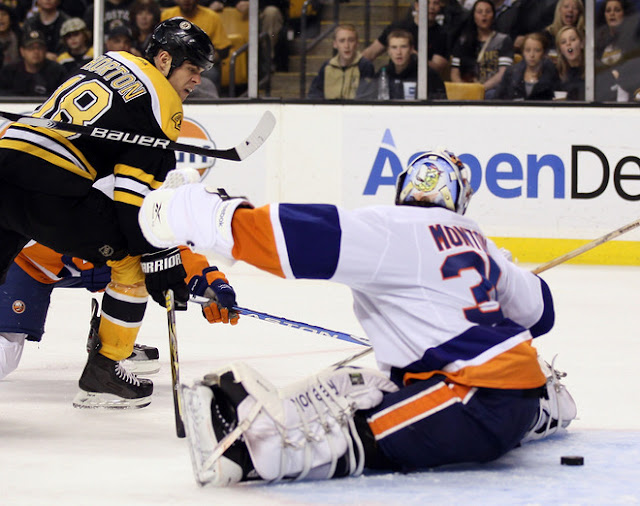 With the 2011-12 NHL season moving from October to November, the Boston Bruins
are finally starting to look like the team that won it all last June, and appear ready to put a rough
first month behind them. The Bruins began a five game home stand Monday night with 6-2
win over the New York Islanders making it three straight, an impressive turnaround after such a
forgettable start. The offense, which could only muster 22 goals through the first ten games, has exploded for 18 in the last three. Boston’s success can be chalked up to a complete team effort, getting solid contributions across the board night in and night out. Boston’s top line of Krejci, Lucic and Horton have set the pace, putting up 15 points during the three game streak. The team has also demonstrated an ability to play with restrained emotion, avoiding being goaded into taking retaliatory penalties, and thus spending less time in the box. When they have been penalized, the penalty killers have been excellent, not allowing a powerplay goal over the last three games. At the same time, the B’s have taken advantage of their own opportunities with the man advantage, netting powerplay goals against Ottawa, Toronto, and New York.

Boston’s first winning streak of the season has featured several other ‘firsts’ for the club.
In Saturday’s 7-0 drubbing of the Leafs, Tyler Seguin recorded his first NHL hat trick, and Tim
Thomas picked up his first shutout of the season. On Monday, Tuukka Rask finally got some
help from the offense, earning his first win in four tries. And Benoit Pouliot got his first tally for the Black and Gold, ending a 32 game goal scoring slump that dated back to February 15
of last season when he was still with the Habs. Pouliot was back in the lineup in place of Rich
Peverley who is dealing with an undisclosed injury. Peverley has missed several practices and,
after playing Saturday in Toronto, was scratched from Monday’s game.

Unfortunately, success often comes with a price. Boston will be without the services
of forward Daniel Paille who was injured by a Steve Staios point shot early in the third period
Monday night. With the Bruins protecting a one goal lead, Paille skated out to block a shot
which took off on the Islanders defenseman and struck Paille in the face. Luckily, Paille’s
visor absorbed the brunt of the impact, but the Bruins winger still suffered a broken nose and
facial lacerations. It was a scary moment, as Paille fell to the ice, bleeding profusely. He was
eventually able to exit under his own power, and was seen in the locker room following the
game. Bruins GM Peter Chiarelli said that Paille would undergo surgery on Wednesday and
will be listed as day-to-day. The question now is who will replace him? With Peverley unable
to go, the B’s have called up 2007 first round pick Zach Hamill from Providence. The P-Bruins
leading scorer skated in three games for Boston last year, picking up an assist in Boston’s fight- 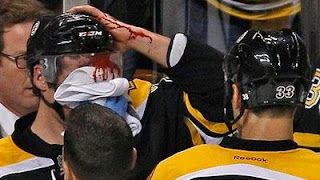 Boston’s recent success has come against some of the hottest teams in the league. And,
although they are playing well, it’s not going to get any easier. On Thursday the new look
Edmonton Oilers bring their dynamic ‘Kid Line’ into Boston in what will mark Taylor Hall’s
first visit to the TD Garden. Edmonton, who’ve finished dead last in back to back seasons, have
surprised everyone. The Oil have rocketed to the top of the Northeast division with a 9-3-2 start, and are one of the most exciting teams to watch. The Bruins head into the game attempting to get back to the .500 mark for the first time since October 8th. This game has all the makings
of another classic between these two teams. Let’s just hope, for Boston’s sake, Petr Klima is
nowhere in the building.[endtext]