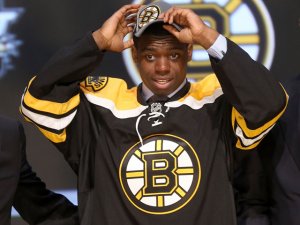 The Boston Bruins have drafted goalie Malcolm Subban, the younger brother of Montreal Canadiens defenseman P.K. Subban.
The Bruins chose Subban, who played for Belleville in the Ontario Hockey League, with the No. 24 pick of the first round of the draft in Pittsburgh on Friday night.
With Tim Thomas saying he plans to take the coming season off, and Tuukka Rask poised to replace him as the Bruins No. 1 goalie, Subban adds depth to the position.