Bruins vs Rangers Round 2 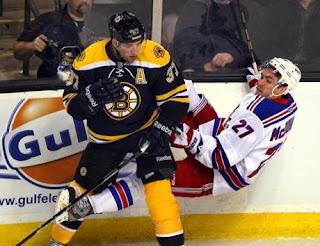 Saturday night we saw a great effort from the B's as they absolutely dominated the "wicked good" Rangers 3-1. They responded to the strong play by putting in a strong effort against the Winnipeg Jets, hitting 5 posts, but coming out with the shoot out victory, bringing the B's to an early 2-0.

On the other hands the Rangers followed up the Saturday loss to a 6-3 massacred by the Penguins, following to 0-2 on the short season.

Wednesday night, the Rangers will be seeking revenge against the B's as the B's make their first short road trip of the season.

The thing I am going to constantly be looking at is the Power Play. We are 0-9 so far, but I have to admit it is not as eye gouging as it has been in years past. The B's are getting good looks and puck movement but still can't get the puck in the net. I would like to see the Bruins finally capitalize on the man advantage and gain some confidence in that department.

On the other hand the Penalty Kill has been superb as always. We are a perfect 9-9. The most intriguing part of the Penalty Kill was in Monday's game against the Jets where they were a man down for the final 1:28 of Overtime and were able to kill it off sending the game to a shootout. I will expect to see the Penalty Kill continue to be successful.

The puck drops at 7:30 on NBCSN so we Bruins fans won't get to hear Jack and Andy, but we will get Pierre in between the glass which is always a thrill! Not!