Gut check week for the B's

The Boston Bruins are off to a hot start going 3-0-1 in their first four games. The B’s look great so far thanks to strong defensive play, a flawless penalty kill and solid 5 on 5 goal scoring. Tuukka Rask has stepped into the starting role and done a good job being the number one guy.

Due to the shortened NHL season teams will have fewer days off between games and will find themselves playing more frequently than usual. Staying focused and skating hard every night will keep the B’s on track for home ice come post season time. The Bruins will get their first taste of the compact schedule this week as they prepare to play three games in four nights.

Tonight’s game against the Hurricanes will kick off an early statement week for the B’s as they try to remain a powerhouse in the East. The Bruins have struggled playing the Canes on the road over the past few years. In their last four games in Carolina Boston has gone 0-4 and has been outscored 13-3. The Hurricanes are coming off two straight wins beating up Buffalo Thursday and Friday night. Cam Ward has been shaky this year and the Bruins will need to get to him early and often to win this game. Anton Khudobin will get his sixth career start and first of the year for the B’s. Anton remains a very unproven NHL goalie and needs a good game tonight to hold on to his roster spot. 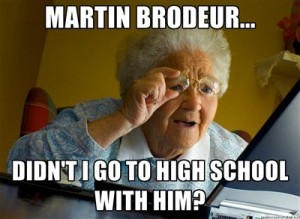 The Bruins come right home tomorrow night to face the defending Eastern Conference champion New Jersey Devils. The Devils are off to a hot start posting the same record as the B’s with three wins and an overtime loss. I guess no one told Marty Brodeur that he turned 40 because he’s still playing like he’s 25. Brodeur’s 1.69 GAA is good for third in the league right now and his .932 save% is top eight. New Jersey has tonight off and will be well rested for their trip to Boston on Tuesday. Expect Rask to be back in net for this one.


Buffalo started off good beating Phily and Toronto but have dropped three games since and fell to 2-3 on the year. The Sabres should not be legitimate in the East this year but on any given night can still give you a game. When Ryan Miller is on he’s a fantastic goalie and the Bruins have had trouble with him in the past. Buffalo needs Thomas Vanek to get healthy to put their best foot forward and have a shot at beating the Black and Gold.

If the Bruins can manage four points out of these three games they should remain atop the Conference and continue to solidify themselves as championship material.