Bruins Show They Have Hearts of Champions, Lose in Shootout 4-3 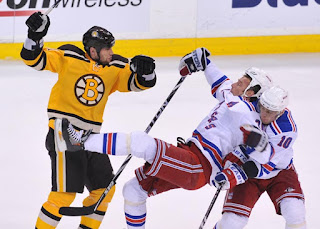 Boston MA. The New York Rangers came in tonight on their second trip to the Garden and their third meeting with the Bruins over the first month of the shortened NHL season.

The Rangers were the first to strike as Rick Nash drove through the zone drawing three Bruins and Tuukka. Nash fell to the ground but was able to pass the puck to Carl Hagelin who finished it behind an out of positioned Tuukka.

The Bruins would go into the intermission down by one, but started building momentum in the early part of the second, before a missed pass by Lucic led to a 2 on 1 odd man rush led by Derek Stepan who put it by Rask.

The Bruins would go into the third down 2-0 and would just come off killing a 5 on 3 when Anton Stralman got one passed Rask, bringing the Rangers to a 3-0 lead with just under 18 minutes left to play.

The Bruins would finally light the lamp as Krejci hammered a loose puck out front at the end of power play shift as Rick Nash was coming out of the penalty box.

The Bruins would fight to the end as they would score with 1:31 left on the clock as Horton punched in  the puck Bringing the game to 3-2. Moments later Marchand tied it up with 42.3 seconds on the clock, and send it into OT.

OT consisted of back and forth hockey with each team getting quality chances and each goal tender making excellent saves, but the game would go to a shootout.

Ryan Callahan would get the final say in the shootout beating Rask in the 4th round.

The Bruins would out shoot the Rangers 39-29, and have outscored their opponents in the third period 15-5 this season. The powerplay would finish 0-4 on the night, and the penalty kill would go a perfect 4-4. They are also the only team this year to come back from down 3-0.

The Bruins really need to get something going on the powerplay. They have had a number of opportunities this season to blow the games out, but they have been dormant on the man advantage.

The Bruins next go at it Friday night back in Buffalo, Don't quit on this team, they are the real deal!

Weigh in with your thoughts in the comment section.