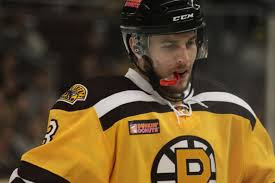 Yesterday during Bruins practice Johnny Boychuck was hit with a puck and got off the ice under his own power, but eventually needed help to get to the locker room and did not return to the ice. Later in the day it was announced that the Bruins had called up Matt Bartkowski from Providence on emergency basis.

This might mean Boychuck is a no go for tonight's game in Toronto, or that the Bruins are going to give Boychuck the night off to rest.

This is a terrible time for the injury bug to start hitting the B's, hopefully Boychuck is alright and will be back on the ice soon.

Puck drops at 7pm as the Bruins are in Toronto to face the Maple Leafs. Should be an entertaining game, and hopefully the Bruins come out with the 2 points.