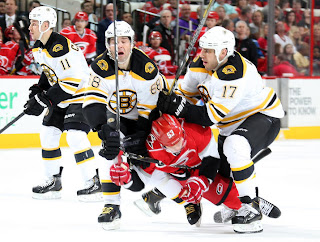 The Carolina Hurricanes looked like a different team then the team who came into the Garden Monday and got lit up  6-2. Tonight, the Hurricanes spoiled the Bruins chances to regain control of the North East division on the back end of stellar goal tending by Justin Peters.

The Bruins tallied first after Matt Bartkowski ripped a shot that redirected off of Milan Lucic's skate.

The second period featured back and forth play until Juri Tlusty put a Jordan Staal pass behind Rask.

Tyler Seguin answered on a sweet little break away move to tie the game at 2 going into the final stanza.

The Hurricanes had the last laugh as former Bruin Joe Corvo blasted a power play goal in to give them a 3-2 lead. The Bruins couldn't do anything in the final minutes as Carolina put the nail in the coffin with an empty netter by Juri Tlusty.

Jaromir Jagr had a great game, creating a number of quality chances, but Peters shut him down, especially in the middle of the 2nd period on a Bruins 5 on 3 chance.

Tuukka played pretty sloppy letting in a couple of savable shots. The defense again played rather sluggish along with a number of the forwards. Maybe they are waiting to unleash in the playoffs? Let's hope so. Maybe the Swede Soderberg will inject some life into this bunch.

The Bruins move on as the head back to the Garden for a Monday night battle vs Ottawa in a potential 1st round playoff preview.

Good news out of this disgusting game, the Montreal Canadiens got manhandled by Toronto 5-1, so Boston is still 1 point behind for the North East lead.