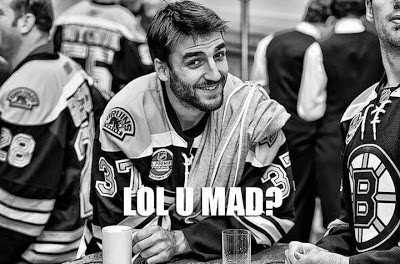 CBS Sports
Patrice Bergeron, probably the MVP of the Bruins this season, has been named one of the three finalists for the Selke Trophy, the award given to the best defensive forward in the league. Bergeron will try to defend his title against two other stellar players in Pavel Datsyuk of the Detroit Red Wings, and Jonathan Toews of the Chicago Blackhawks.

As we all know, Bergeron is perhaps the best 2-way player on the Bruins and a beast in the face-off circle, winning an absurd 62.1% of draws. Toews and Datsyuk are also great 2-way players as each had great face-off numbers (above 55%) and tied the league in takeaways at 56 each.

All in all, each of these players is a worthy candidate. What a week for Bergeron, scores two crucial goals to help the Bruins move on to the next round and is named a finalist for the Selke.