It's finally time for the second game of the first round in the Bruins vs Maple Leafs series. The teams had a Thursday and Friday off but for fans it felt longer.

Both teams have made changes to their lineups. For the Bruins both Rich Peverley and Dougie Hamilton have been reinserted into the Bruins line up. Peverley replaes Kaspars Daugavins and Dougie replaces the suspended Andrew Ference. Ference was suspended one game for elbowing Toronto forward Mikhail Grabovski in the head. You can see the NHL suspension video below.

Toronto has also changed their lines moving Lupul to the first line and moving JVR to the second line. For the Leafs to win they need to get goals early and turn the game into a shoot out, which the Bruins cant keep up with. In game one they couldn't put their plan into action and were promptly beat down by the Bruins.

The Bruins saw good things from the players that have been slumping most of the year. Nathan Horton scored a goal when he redirected a Wade Redden slap shot. Milan Lucic supplied a lot of energy for the Bruins and got an assist when on a line with Krejci and Jagr.

Wade Redden was the most impressive Bruin in game 1 along with Tuukka Rask. If Redden keeps up this type of play and energy then Chiarelli will look like a genious again and the Bruins will have added a key piece in a playoff run for next to nothing. 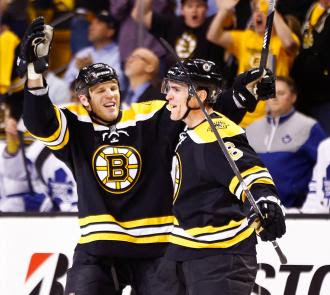