Bruins and Bergeron "real close" to an extension; Bruins "not sitting back" at the Draft 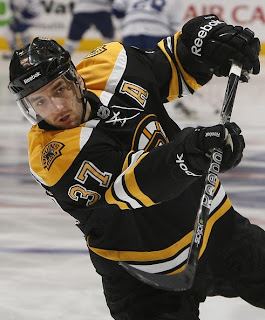 Fresh off of being released from a Boston hospital on Friday, Patrice Bergeron is giving Bruins fans even more good news.

According to Darren Dreger of TSN, the Bruins and Bergeron are "real close" to agreeing to an extension that would keep the center in Boston for the remainder of his NHL career.


During SCup @Real_ESPNLeBrun reported the Bruins working on 8 year ext for Bergeron. Sounds like it's getting real close.
— Darren Dreger (@DarrenDreger) June 28, 2013


The report Dreger is referring to comes from back on June 14, in which LeBrun stated that the B's were looking to resign Bergeron to an eight-year extension after the season ended. Well, now that the season has ended, word has resurfaced and nothing has changed.

This is obviously great news for Bruins fans, as Patrice Bergeron would undoubtedly receive a truck load of offers from teams if he hit the open market. As was the case back in 2010, the Bruins brass wants to lock-up Bergeron before he can test free agency and potentially have to deal with a team could back up the bank truck looking to sign him.

But something tells me that no situation, city, amount of money or outside promises could sway Bergeron away from Boston. He wants to be a Bruin for life, and he will be a Bruin for life. He loves this organization and the city, and nothing would ever convince him to leave.

Also, as a precursor to the weekend's Entry Draft, CSNNE's Joe Haggerty tweeted out that the Bruins will not be sitting on their hands come Sunday.


From what I'm hearing Bruins front office is not sitting back and being passive this weekend in New Jersey. Should be some fun #BruinsTalk
— Joe Haggerty (@HackswithHaggs) June 28, 2013


So what does that mean? Will the Bruins start wheeling and dealing? Haggerty on June 25th reported that the Bruins have chosen not to use their two amnesty buyout exceptions, and Peter Chiarelli also stated as much in his season ending press conference on Wednesday.

If the Bruins had used their buyouts, many speculated either Chris Kelly or Rich Peverly would be the two choices, as their play during the regular season and the playoffs was disappointing. Kelly has three years remaining at $3 million per, and Peverly has two years at $3.25 million (capgeek.com).

Also, don't forget that the Bruins do not own a pick in the first round, as the Dallas Stars now own pick #29, a result of the escalator in the Jaromir Jagr trade that upgraded the original second-round choice to the first-round when the B's made the Eastern Conference Final.

Will GM Peter Chiarelli be looking to trade the two instead? The Bruins also have yet to sign RFA Tukka Rask and UFA Nathan Horton. Would Chiarelli look to unload Kelly and Peverly's contracts to free up cap room to sign them both?

Some tough decisions lie ahead for the B's, as the shrinking salary cap does not do them any favors in trying to upgrade this team for the upcoming year.

Check back at Bruinslife.com to follow what goes down on Sunday at the Draft.