Tonight the Chicago Blackhawks could be crowned the Stanley Cup Finals champions in the heart of Boston. Game 6 tonight is a close out game for Chicago as they are up 3-2 in the series and its a do or die game for the Boston Bruins. 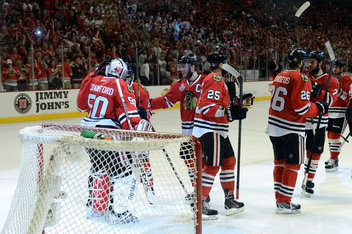 The Bruins are used to fighting for playoff survival and it was in 2011 that the Bruins had to win game 6 and game 7 to win the Cup. Needless to say the Bruins are experienced when it comes to being behind in the playoffs. If the Bruins dont use that experience and win tonight then all of Boston will have to watch as Chicago celebrates on Boston ice.

1) Chicago Top Line. The Bruins need to control the top line of the Chicago Blackhawks, especially with the warm weather and the melting ice. Kane has started to skate circles around Chara and Siedenberg in these Stanley Cup Finals which has left Teows open in front of the net. The Bruins need to make sure Bergeron is on the ice whenever Teows and Kane are.

2) Seguin. Seguin is the franchise corner stone and he has been invisible all playoffs. Seguin was demoted to the third line by Julien and rightfully so. But now Seguin has been slumping and has been slumping hard. The Bruins need Seguin to be their top goal scorer but instead Seguin has as many goals as Rich Peverley, one.