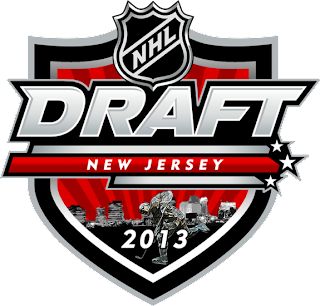 So the 2013 NHL entry draft is in the books, and the first checkpoint of the shortened off-season has been cleared. The pre-draft promises for dozens of potential blockbuster trades (with one involving a very scrutinized Bruins forward) turned out to be nothing more than old-school GM power tactics.

In terms of trades, nearly all of them fell under a player-for-player or a player-for-pick variety; nothing franchise altering for teams involved, with the exception of the Vancouver Canucks and New Jersey Devils swapping former BC goalie Corey Schnieder for the #9 pick, who turned out to be center Bo Duke. I mean Bo Horvat.

On the Bruins side of things, nearly all of the rumors swirling around the team did not ignite.

No trades to get back into the first round; Chris Kelly and Rich Peverly were not swapped for players, picks or cap relief; Tyler Seguin is still a member of the hockey club, but he had to take a serious beating in the press from GM Peter Chiarelli as the price for staying put.

In the end, despite plenty of chatter on the Prudential Center draft floor, the B's did not complete a single trade, and instead stood pat with their six selections.


The new 'One-Eyed Swede.' Ok, maybe not, as we already know a little bit about the kid. The 6' 1", 179-pound Arnesson played in the Swedish Junior League this past year. He accounted for a scorching 1 assist in 31 games, but to be fair, he is not expected to make like fellow swede Erik Karlsson racking up points on the blueline.

According to Kirk Luedeke, a regional scout and a Bruins and NHL prospect writer who knows a thing or two when it comes to evaluating prospects, had this to say after the pick:


Arnesson: Good skater, size. Not flashy- more of a defensive presence. Sometimes tries to do too much- would have been higher a year ago
— Kirk Luedeke (@kluedeke29) June 30, 2013

A 5' 10", 168-pound Slovakian who also played in the Swedish Junior League this year, Cehlarik scored 17 goals and accounted for 37 points in 38 games for the Lulea Junior Team. GM Peter Chiarelli compared his game to Chicago Blackhawk Michal Handzus in terms of his size, skating and passing ability. He's a young kid, as he turns 18 on August 2nd. Certainly a long-term pick, I don't believe he will be seeing NHL action for at least another two years.

Maybe the best story for the Bruins in this draft class, the 5' 10",  170-pound Fitzgerald is a native of North Reading, MA, so a local kid being drafted by his hometown team is always cool. In addition, Fitzgerald is also the nephew of Bruins Assistant Director of Amateur Scouting, Scott Fitzgerald. That's pretty gnarly. Talk about putting in a good word. Fitzgerald recorded 14 goals and 16 assists in 26 games for the Valley Junior Warriors of the Eastern Junior Hockey League this past year. He committed to playing at BC in the Fall.

Wiley Sherman stands at 6'6" and weighs 196-pounds and is a defenseman from the Hotchkiss School in Lakeville, CT, he recorded four goals and six assists in 26 games during the '12-'13 campaign. Again, Kirk Luedeke had the low-down on the pick.

Wiley Sherman has the one thing you can never teach no matter how hard you try: size. He's also mobile- a lot of raw material to work with
— Kirk Luedeke (@kluedeke29) July 1, 2013

Having size and mobility is always good when you're a defenseman.  Sherman said in his interviews that he plans to return to Hotchkiss next season and then attend Harvard in 2014-15.

Another Swede for the Bruins. The 6'0" 184-pounder Blidh split his time between the Frolunda U-18 team and the Frolunda Junior Team in the Swedish Junior League this past season. He played in 43 games and recorded 17 goals and 10 assists...with 80 penalty minutes. Does he play with an edge? Racking up 80 PIMs looks pretty good when you're drafted by the Bruins.

WEEI.com writer DJ Bean referred to the pick as the Bruins' "Duron Harmon moment," a reference to the Patriots drafting Harmon, a safety out of Rutgers University, and no one having any clue who he was. But he does have a twitter account and he speaks English. So he has that going for him.

With the second to last pick in the draft, the B's took left-winger Mitchell Dempsey. The 6'3", 210-pound Dempsey is certainly the largest of the Bruins draftees this year. He played for the Sault Ste. Marie Greyhounds of the Ontario Hockey League in the '12-'13 campaign. In 36 games, he recorded one goal and four assists. Sean Lafortune, an OHL regional scout had this to say:

An interesting pick, as Dempsey definitely can have a significant size being a forward at 6'3" and 210+ pounds.

And thus concludes the 2013 NHL draft for the Bruins. It's safe to say that all six picks made by the team are not expected to play in the NHL any time soon. These are not players expected to make the jump into the Big Show next year in emergency situations. They will be stashed away and allowed to develop over the next few years. Which is fine, as the Bruins are in no need of imediate help in the player developement ranks.