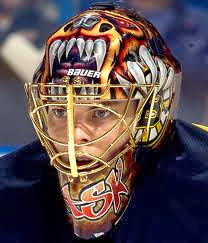 With the start of the 2013-14 NHL season hovering one week away hockey fans are chomping at the bit for the preseason to wrap-up and the chase for the Stanley Cup to get underway. Fantasy hockey owners are prepping for their drafts and looking to snatch bragging rights from their co-workers and best friends. If you are one of the millions who play fantasy hockey, then I offer some draft advice as a fellow manager and Bruins fan.

Having the best of both worlds is any fantasy owner's dream. If you have the ability to snag a few Bruins for your roster, this will allow you to strengthen your rooting interest and pour more passion behind the black and gold. However, words of caution must be noted. Not every skater on the Bruins roster is built for fantasy production. Make your choices carefully or suffer the fantasy wrath at the hands of your beloved Bs.

The upcoming season presents some solid options from the Bruins roster for fantasy owners. Headlining the list is netminder Tuukka Rask. Yahoo! fantasy sports ranks Rask 6th overall. He is guaranteed to give his owners a high number of quality starts and has shown no let up from the momentum he built last season. A goalie's statistics are generally bolstered by the defense in front of him. Tuukka's line mates should have no problem keeping pucks away from his crease and enhancing his fantasy value.

Fantasy focus offensively falls on the shoulders of the "Big Five". New acquisition Loui Eriksson ranks 58th on Yahoo! and should solidify any owner's shots on goal, goals and assists categories. If faceoffs won is a category in your pool, then Patrice Bergeron is a must have option. He is consistently in the top 5 of the NHL in this area. David Krejci is no slouch in this department either and offers steady +/- and assists production as well. If the Milan Lucic of last year's playoffs arrives for this year's regular season, he becomes a first round selection in any league's draft. A healthy and aggressive Looch can rack up points and PIMs with ease. Brad Marchand was a huge pick-up for fantasy owners last year and earned a ranking of 119 on Yahoo! this season. He scores in bunches and can pump up your shots on goal category in a hurry.

Options for fantasy owners on the defensive side of the puck are a bit less enticing. Zdeno Chara ranks 71 in Yahoo! fantasy and traditionally provides scoring, a strong +/- rating and a higher than average number of shots on goal. Dougie Hamilton earned a healthy 192 ranking and could be a sleeper selection for some owners thanks to his willingness to shoot the puck. If you happen to be in a deeper league with several teams and multiple roster spots, I recommend rolling the dice with Torey Krug. A carry-over of his post-season play could result in high returns for a gutsy owner.

Remember that being a fantasy owner allows you some liberties as a Bruins fan. You can embrace the saying "once a Bruin, always a Bruin" and load up your team with the likes of Tyler Seguin, Nathan Horton, Jaromir Jagr, Michael Ryder and Rich Peverly. You can shock your league and draft the wayward Tim Thomas. Regardless of your strategy, I wish you the best of luck with your fantasy draft. May the best Bruins find their way on to your roster.

For fantasy updates and advice throughout the season tune in to Sirius/XM NHL Network Radio and check out "The Point - Fantasy Edition" with Jim "Boomer" Gordon and Rob Higgins.