Bruins get back on track, beat Panthers 4-1 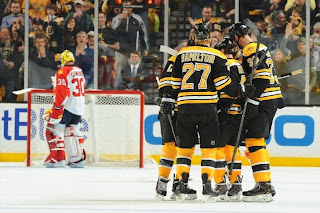 The Bruins got back on the winning track and beat the lowly Panthers 4-1 at the TD Garden.

It was another slow start for the B's (stop me if you've heard that these past three weeks). A scoreless first period between the two teams with not much going on, save for a questionable high-hit on Chris Kelly from Jesse Winchester which saw no penalty called. Gregory Campbell fought Winchester later on in the first.

David Krecji got the Bruins on the board 7:17 into the second after some good work from the top line. Krejci got the puck at the blueline, zipped it over to Zdeno Chara quick, then got the return pass and rifled a shot on goal. With Jarome Iginla screening in front, the puck squeaked by Panthers goalie Scott Clemmensen.

Boston held the lead through the third, where they added a second tally at the hands of Brad Marchand. Marchand swooped into the crease and put home a Loui Eriksson shot that trickled out of Clemmensen's pads. Its Marchands first goal since the second game of the season, 12 games ago. Its his first point in five games, dating back to 10/30.

Midway through the third, the Bruins Tim Thomas was introduced on the Garden screen and received a standing ovation from the Boston crowd, a well-deserved honor. It really is a non-issue with Thomas. The man deserves a formal 'thank-you' from Boston...we'll have to wait until January 29 when the Panthers return to Boston.

The Panthers did get one the board, courtesy of Jesse Winchester, who batted a rebound past Rask off a Nick Bjugstad snapshot in the slot. After Marchand wired a pass through the crease, missing Loui Eriksson and Patrice Bergeron,  the ensuing rush back up the ice for the Panthers produced the goal, breaking up Rask's shutout.

The Panthers brought some heat in the final minutes of the game, recording a few more scoring chances, but Rask turned aside the rest of their attempts.

Reilly Smith, who has a habit of scoring late versus the Panthers, picked off a hideous Tomas Fleischman turnover dead center between the two face off circles. Smith cocked, fired and beat Clemmonson on the blocker side for the B's fourth goal.

Smith has been quite the surprise this season, as he has 2 goals and 8 assists on the year.

Although Rask didn't get the shutout, he played a tremendous game, continuing his ridiculous play versus the Panther.

Its a big win for the B's, as they finally got off the schnide and played a pretty solid game. Also, with an eye to Saturday and Monday, with games against Toronto and Tampa Bay, grabbing these two points put the B's in a great spot to reclaim first place in the Atlantic.