Bruins vs Senators: keys to the game 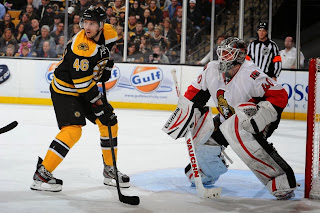 After an emotional overtime win against the Blue Jackets, the Bruins are ready to turn their attention to the Ottawa Senators, just a day later. The Senators are division rivals and are a tough team for the Bruins as they equal each other in depth.

The Senators are 7-7-4 so far this season and have stayed close in most of their losses but haven't been able to get the wins. Bobby Ryan has been what they expected him to be though and the kid leads the Sens in goals with 9 and has 10 assists to go along with it.

Goalie Craig Anderson has posted a 3.30 GAA this season and a 4-5-2 record. Its been a disappointing start to the season for the Franchise goalie. The backup Robin Lehner is 3-2-2 with a much better 2.13 GAA. It may be a time of change in Ottawa.

1) First Line. The first line on the Senators is very dangerous with Michalek and Ryan both extremely dangerous who can score and rough people up. The Senators have a lot of depth so not only will the Bruins have to watch out for the first line but they also have to deal with the lines that come out after them.

2) Erik Karlsson vs Torey Krug. Erik Karlsson is one of the best offensive defensemen in the league. He has proved himself as a legitimate franchise defenseman. Now the Bruins have their own Erik Karlsson in Torey Krug. It'll be interesting to see how plays better tonight and then who does better over their career.