Bruins vs Flames: keys to the game 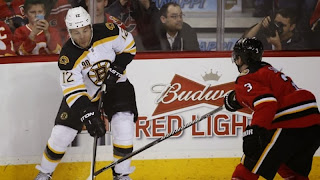 On a snowy night in Boston, the Flames are in town to play the Bruins. It'll be the first home game for the Bruins since December 7th against the Pittsburgh Penguins. The Bruins were 3-1 on their road trip losing only to the Canucks.

The Bruins beat Calgary the last time the two teams faced off 2-1. David Krejci and Reilly Smith both scored goals in that game. Iginla tried as hard as he could but he couldn't put the puck in the net that game. Maybe he can in this one.

1) Smith Is The Savior: The Bruins lost a lot when they traded Seguin. They traded away a fan favorite (pinkhats and yes you too diehards loved him) as well as their top regular season goal scorer. Seguin was also someone who progressed into a star.

Now Reilly Smith has that same opportunity. Smith has really started to blossom of late, with a goal against Calgary and two goals against Vancouver. Smith is developing into a goal scorer, something the B's desperately need.

2) Calgary Goalies: Calgary's weakest link are their goalies. The Flames have been rotating Berra, MacDonald, and Ramo. None of them have a lower GAA than 2.60 or a save percentage above .910. Its an easy area for the Bruins to capitalize on.