Bruins vs Leafs: keys to the game 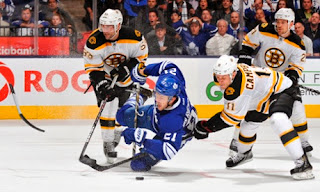 Believe it or not the Bruins play tonight in Toronto. The B's are coming off of the most emotional game all season just last night against the Pittsburgh Penguins. It feels like we need a week to digest the Bruins/Pens game but neither the fans or the Bruins have that luxury.

So who are their replacements? Two familiar faces for the Bruins team, Ryan Spooner who was called up, and Jordan Caron who has been a healthy scratch most of the season. The Bruins also called up Matt Fraser who will play his first game in a Bruins sweater tonight.

1) Injuries, Injuries, Injuries: The Bruins are going to have to deal with a few new players in tonights game and some guys are going to get new line mates. The most interesting will be the Fraser-Spooner-Soderberg line. 2/3 of the line are AHL call ups and are very young. But they have performed very well in Providence together and there is always the chance it could be the same in the NHL.

2) Leafs Are Good Now: The Leafs took us to game 7 in the first round of the Stanley Cup playoffs last year and then improved their team a lot more in the off season. Theyre a really good team now and it'll actually be a fun game to watch and a good match up.