Bruins vs Leafs: back in Boston 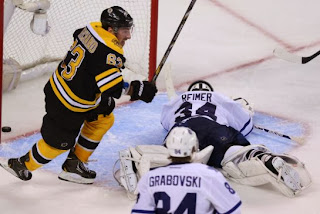 The biggest storyline for the game tonight is Dougie Hamilton who is out with a concussion. Thankfully for the Bruins, defensemen Johnny Boychuck will be back on the ice tonight after the birth of his twins. Hamilton's injury is just another on a seemingly ever mounting list.

So on to the Leafs. Who is this team the Bruins are facing? Well, they're still the Leafs. Since November 1st the Leafs have only won four games in regulation. Leafs fans don't deserve it but the Leafs just cant seem to pull out a winning season.

1) Defense. With another defenseman down, the Bruins defense and goal tending seems to be a constant key to the game. What I'm really looking forward to in this game is seeing more of Kevan Miller. With so many defenseman missing so many games, it seems like Miller is a more defensively sound replacement than Matt Bartkowski. We'll see tonight who plays better.

2) Third Line: The Bruins new third line makes it one of the best in the NHL again. Its a bold statement but the line did score a goal in their first game together. Soderberg and Eriksson are both Swedish countrymen playing on the same line with the speedy and great offensive talent Ryan Spooner. #SpoonFeedTheSwedes