Boston Bruins' right winger Jarome Iginla is on such a hot streak that the National Hockey League named him their third star of the week ending February 9th.

How hot?  Try 14 points in his last eight games - a time frame that has seen the Bruins post a record of 6-1-1 and have extended their lead over the floundering Tampa Bay Lightning to seven points.  In fact, the entire Bruins' team seems to have hit a hot patch, scoring nearly four-and-a-half goals per game in that eight game stretch, scoring at least six goals four times. 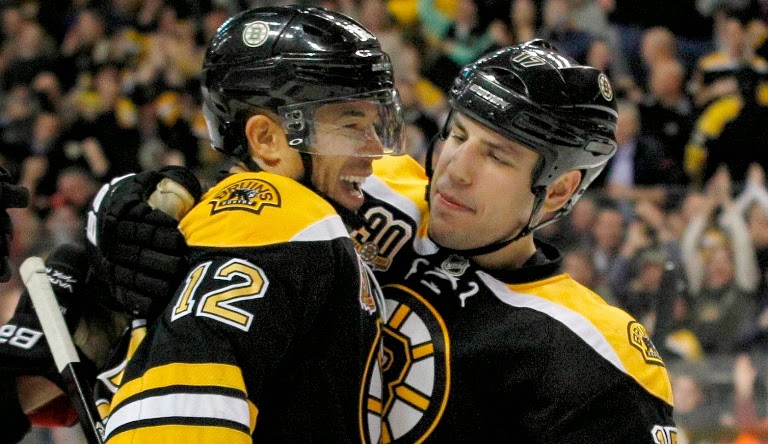 ...all while maintaining the league's top rated defense despite the loss of defenseman Dennis Seidenberg to torn knee ligaments - and the absence of captain Zdeno Chara for the last two games before the Olympic break while he experienced the once-in-a-lifetime honor of being Slovakia's standard bearer for the opening ceremonies in Sochi.

The NHL's hottest team certainly can't be happy about having to take 11 days off before they can begin practicing again, but when they do return, they will be facing a favorable schedule to close out the season as far as the quality of their competition...

...though they embark on a finishing stretch that sees them playing seven of their final nine games on the road - and all in a 16-day frame.

Iginala's 43 points ranks his second on an incredibly balanced Bruins' leaderboard, seven points behind Olympian David Krejci and is one of eight Bruins in double figures in goals with two others right on the cusp, and his plus-25 rating is tied for second on the team with Krejci and Patrice Bergeron behind Johnny Boychuk's Plus-27.

Perhaps the league should have just named the entire Bruins' team the third star.