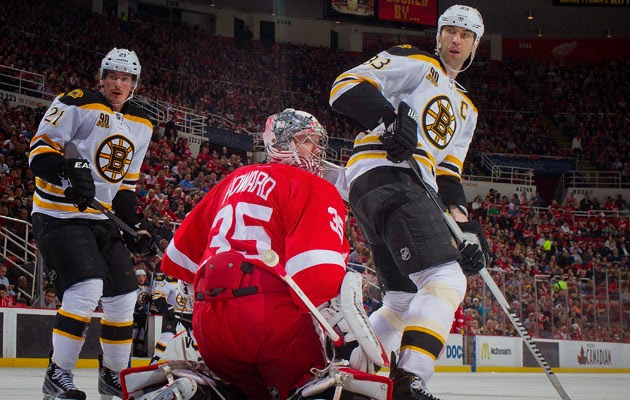 Its Easter Sunday and the NHL has set us up for some matinee playoff hockey. I think its the first time anyone has ever been excited for a matinee game. The Bruins are coming off of a depressing loss to the Detroit Red Wings and, well, hopefully today's game will be better for the Bruins.

The game Friday was building up to be an NHL playoff classic between two Eastern Conference teams. It was 0-0 until the end of the third period and to no surprise it was Tuukka vs Howard for most of the game. Howard is the key to the entire Wings series, and we saw that Friday night.

1) So, Howard Is A Problem- Jimmy Howard was stellar Friday night and shut out the Bruins offense despite the Bruins chances. The strategy against goalies as hot as Howard usually involves waiting for the perfect shot. But the Bruins should take as many shots on Howard as they can and hope one or two easy goals break through eventually.

2) Lucic Is Motivated- Milan Lucic played like a man possessed on Friday. He was playing so intense that he got in a little trouble with the NHL after a sparing incident. But put that to the side and Lucic's performance was stellar. Claude should use that to the B's advantage and get Lucic on the ice more.