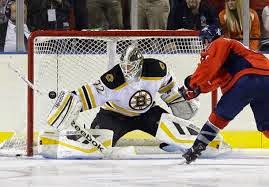 The Bruins announced earlier this summer that back-up goaltender Chad Johnson would not be returning to play in Boston come next fall. I was saddened by this news, as CJ exceeded my expectations behind Rask last season, but the decision had to be made, and it was time to move on.

Today, at the opening of free-agency, the 28 year old goaltender signed a two-year, $2.6 million dollar deal with the New York Islanders.

Johnson had a spectacular season with the Bruins last year, posting a 17-4-3 record, with a .925 save percentage and a 2.10 goals against average. The Bruins, who appreciated Johnson's work, just couldn't afford to make a deal with Johnson due to cap space, especially with young prospect goaltender Niklas Svedberg, who just signed a one-year, $600,000 contract with the Bruins, on his way up to Beantown.

This news comes shortly after news that former Sabres defenseman Christian Ehrhof has signed with Pittsburgh.

Stay tuned to Bruins Life for up to date Free Agent news.