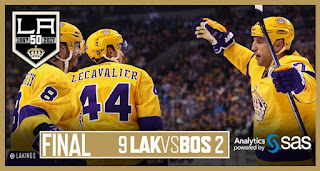 In what can only be described as one of the closest and most nail biting games of the season, the LA Kings edged the Boston Bruins 9-2. The Kings had NINE different players score all NINE goals against the Boston Bruins.

As predicted earlier, Marchand was able to net a goal and provide some offense for the Bruins (that makes 10 goals in 10 games for those keeping count). What wasn't expected, was the Bruins to get absolutely embarrassed defensively. After 5 goals and 27 saves Tuukka was pulled from the net. Ty Randell scored the second Bruins goal to cut the lead to 7-2. The game finished with the tragic 9-2 scoreline.

Want to know who scored the goals for the Kings? Here's a full list: