7 Bruins Missing From Practice with Flu 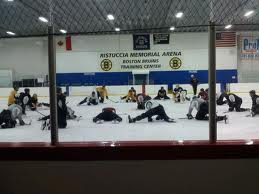 ESPN Boston- WILMINGTON, Mass. – The Bruins gained one, but lost seven for Tuesday morning’s practice at Ristuccia Arena.
A sizeable school vacation week crowd saw Milan Lucic return to the ice, after missing the Bruins’ Sunday game in Winnipeg for a personal matter. There was plenty of available ice, however, as seven players were held out with flu-like symptoms.
The team announced shortly before the 10:30 a.m. practice that Patrice Bergeron, Gregory Campbell, Andrew Ference, Nathan Horton, Adam McQuaid and Daniel Paille were held out. Also not participating in practice was goaltender Anton Khudobin, evidenced by a stack of pads in front of the net opposing the B’s lone healthy goaltender, Tuukka Rask.

This could explain why the Bruins have looked rather sluggish the past couple games. Good thing they have a 4 day break before going back at it Thursday down in Tampa. Also, the team's twitter added this:

No decision yet if any call-ups are necessary for the road trip to FLA, CJ hopeful the players who were absent today will recover quickly^BB
— Boston Bruins (@NHLBruins) February 19, 2013