The Boston Bruins beat the Winnipeg Jets 3-2 in a game where the Bruins looked like the Bruins once again. The scoring started in the second period when Burmistrov scored the first goal of the game. Nine minutes later Tyler Seguin re-directed a Zdeno Chara slapshot for his 3rd of the season. Another nine minutes later Evander Kane, you may remember him from my previous post as the player pretending to use wads of money as a phone... during the lockout, scored. Only 25 seconds later Daniel Pialle scored his sedcond goal of the season off of a Johnny Rocket. Marhand scored the game winning goal for the Bruins in the third period for his 8th of the season. 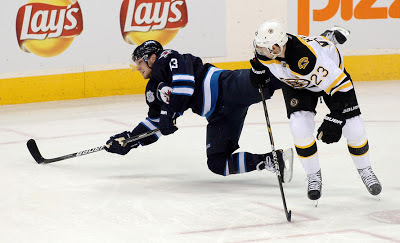 The offense did what people wanted them to do, score. Seguin got a goal which is what people expect from him. Seguin hasnt been on top of his game yet this season but tonight he got in front of the net and played rougher than usual. Another Bruin that people demand more from is Nathan Horton. Horton had a plus/minus of -2 and about 17 minutes on ice. The clutch forward could have been suffering from the loss of his line mate and his other half, Lucic. Lucic had to leave Winnipeg and go back to Boston due to personal reasons. 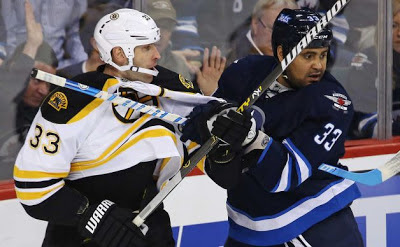 The defense also strenghtened their play and helped Tuukka get his 7th win. Chara is starting to get back to his old ways which the Bruins need. Chara and Boychuck both got assists off re-directed slap shots meaning the defenseman arnt just improving defensively but are also contributing offenseively. So far this season the Bruins D men have chipped in 4 goals and 18 assists. Dougie Hamilton has 1 goal and 5 assists.