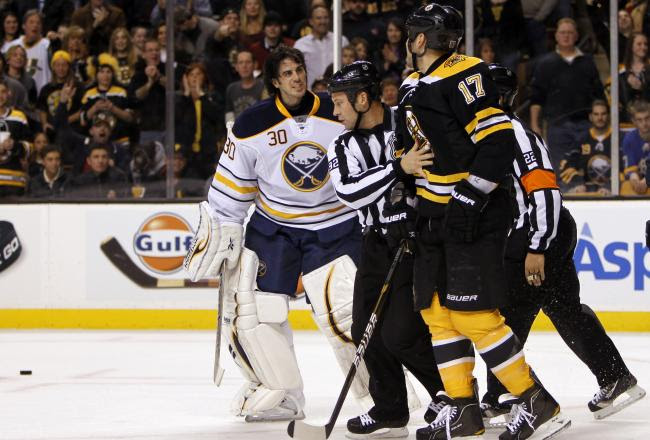 Thursday night's game between the Bruins and the Sabres may not have gone how most people predicted. This includes not only the score of the highly offensive game, but the bad blood between these two teams as well. The result of the game was a 7-4 win for Buffalo, and an angry and offended Brad Marchand. But Marchand wasn't angry with a Buffalo player, but rather the man on the bench, Sabres head coach Lindy Ruff. With 13.6 seconds remaining in the game and a solid 7-4 lead for the Sabres, Ruff called a timeout, a seemingly needless one, other than to stick it to Boston that the Sabres had won. Ruff backed up his point, saying that Lane MacDermid, a known fighter, was lined up next to one of buffalo’s “skilled players.” He claims that he didn’t want anything to go on between the two. Bruins head coach Claude Julien said that nothing was going to happen between the two, and that he wasn’t sure why Ruff took the timeout. Julien remained classy, saying that “he’s (Ruff) is entitled to it (the timeout), so you just play along with it.” Bruins forward Brad Marchand, wasn’t quite as accepting of the decision. After the game, Marchand stated that Ruff wanted to be a “big shot”. But Marchand kept his cool. “That’s pretty disrespectful. If he wants to be like that, that’s fine. We just have to move on.” This will only help to spark up the quickly growing rivalry between the Bruins and the Sabres, and it would be surprising if you don’t see more of this when the two teams meet again on the tenth of February. I guess we’ll just have to wait and see. source-http://nesn.com/, http://img.bleacherreport.net/img/images/photos/002/133/336/hi-res-5695374_crop_exact.jpg?w=650&h=440&q=75