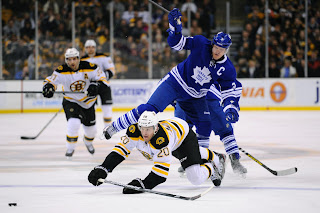 The Bruins returned to Boston and corralled the 2 desperately needed points after Patrice Bergeron dangled Toronto goalie James Reimer in the shootout sending Toronto home with the loss.

The Bruins found themselves in a second period 2-0 deficit before struggling Milan Lucic came through with his 5th of the season cutting the lead in half.

Bergeron then tied the game half way through the third sending it to overtime and further on to a shootout where he and Tyler Seguin scored.

The Bruins continued the trend of having to dig themselves out of holes.

Lucic must have gotten the wake-up call as he was able to produce a goal.

The Bruins still are in need of someone who can bolster the offense, more reports say they are asking about Jaromir Jagr of the Dallas Stars, Jerome Iginla of the Calgary Flames, and new to the list is Martin St. Louis of the Tampa Bay Lightning. It will be interested to see what Chiarelli does come the trade deadline. Will he stick to his conservative approach or will he go and make a splash.

The Bruins next play Wednesday against Montreal and then having two days off before going on the road to play a back-to-back against Philly and Buffalo on Saturday and Sunday.

These are crucial games for the Bruins as they try to retake the Northeast Division.