Forecasting a Rivalry Week for the Bruins 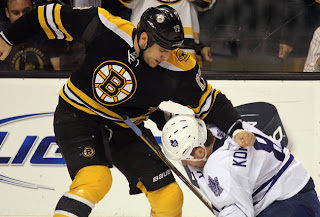 The Bruins roll out their newly formed lines after one day of practice, and the first team that gets to deal with it are the Maple Leafs. Julien will most likely start Tuukka Rask in net after giving Anton Khudobin the start in Toronto. Expect a much better effort tonight than what the team put forth on Saturday. The team is pissed, from top to bottom in that locker room. Whether its Rich Peverly being benched a few games ago or the players being shuffled for the new line combinations tonight, every player wearing a black and gold jersey will no doubt bring their A-game against the team they lost to two nights ago.

Nothing is better in Boston sports than Bruins vs. Canadians. Especially when the blood is boiling. Fans go nuts on Twitter; writers from both media markets start taking jabs at the other teams' players; post-game reactions become must watch material. Montreal beat the B's back on March 3rd 4-3, with two 3rd period goals scored while Zdeno Chara was serving a life sentence in the box for defending Tyler Seguin. The loss was a bitter pill to stomach for fans. A large part of that loss has to do with a realization that fans have to come to grips with: This Montreal team is legit. Their have immense talent up front, Carey Price is 2nd in the NHL with 16 wins, and Andrei Markov is back on the blue line and healthy. The addition of Michael Ryder gives the young team a veteran presence in the locker room and on the ice. If Montreal can win another game in Boston, it will be a huge confidence boost to their side.

The Bruins travel to Philly for the first time this year on Saturday, and the team waiting for them is still called the Flyers, right? Philly sits in 13th place, just four points from dead last in the Eastern Conference. Their play this year is nothing short of a shock, as the team stacked with talent has not been able to put it together since the shortened season started. You have to wonder if Peter Laviolette's job is in danger with where the Flyers sit with only 21 games to go in their season. Ilya Bryzgalov has been a huge disappointment, as has been the forwards. If the Flyers want to even consider playing hockey in late April, they have to start winning now.

The hellish month of March ends in Buffalo, where the Bruins will play their 17th game of the month in a span of 31 days. The Sabres are in shambles. Lindy Ruff was canned last month, and the team sits with 30 points and out of the playoffs at the time being. The Sabres are looking to put games together and claw their way back into the playoffs, and they got a good result on Saturday with a win in Montreal. As is the norm when the Sabres and Bruins play each other, expect a hard hitting, low scoring contest. The key for the Bruins is to stay focused and fresh with having played in Philly the day before. For the Sabres, they have to start stringing wins together and playing more consistent hockey. If not, it will be consecutive years with no postseason action

This week will be a huge test for the Bruins, as each opponent will bring all they got and battle the Bruins for 60 minutes. If the line changes do not hold up and the team continues to struggle to score, expect the buzz and demand for a trade to increase dramatically. Lets see how they can handle the adversity