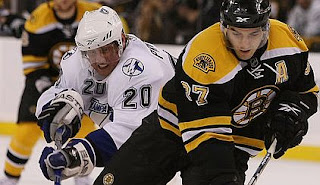 From the moment the puck dropped it looked like the Bruins were in for a long afternoon. Thanks to two Tampa powerplay goals the Bruins quickly found themselves in a 2-0 hole, but were able to sack up and prove once again that they have heart.

Steven Stamkos and Alex Killorn would score during the first period, as Tampa took a commanding 2-0 lead. Claude must have said something to the B's during intermission, because they were changed men coming out to start the 2nd.

3 minutes into the 2nd Seguin was found by Dougie Hamilton on the powerplay and picked top corner on Tampa goalie Mathieu Garon. A minute and seventeen second later, Rich Peverley would tie the score from the exact same spot as Adam McQuaid fed him and Pevs blasted it home.
The Bruins would then score the game winner on a Patrice Bergeron, Brad Marchand two on one. Bergeron fed Marchand who hammered it home. Also another powerplay goal.

The refs were flat out horrendous today calling a number of questionable calls. The Lightning had 8 powerplay opportunities while the Bruins had 7.

Back-up Anton Khudobin, or as Joe Haggerty says, The Number One Goalie of All of Kazakstan, made 20 saves on 22 shots. It looked it was going to be a long day for Khudobin, but he stepped his game up after allowing the two goals.

The Bruins extended their win streak to 6 games improving to 6-1-1 at home. They play tomorrow night vs rival Montreal. Broadcast will be on NBCSN at 7:30 pm.