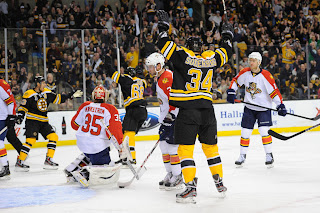 Jaromir Jagr scored his 2nd goal as member of the Bruins, Dougie Hamilton tallied his 5th of the year, Brad Marchand put in the empty netter, and Tuukka Rask made 28 saves as the Bruins shut out the Florida Panthers 2-0 the day after surrendering a 1-0 lead over Pittsburgh to eventually lose 3-2. 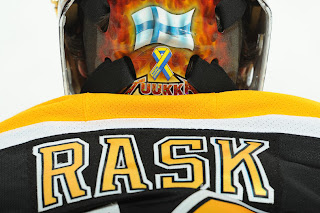 Jagr started the scoring early in the first assisted from Chris Kelly and newcomer, Carl Soderberg.

The Bruins extended the lead late in the second period on a Dougie Hamilton shot from the point.

The third period featured back and forth hockey, preventing Florida from tallying a goal. Late in the third, Brad Marchand scored his 18th on an empty netter. 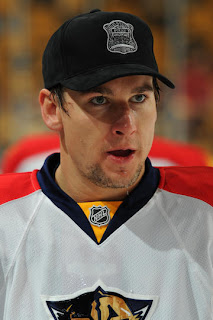 With the win, the Bruins again move back into 2nd place and 1st in the North East with 2 games in hand over the Montreal Canadiens.

The powerplay looked awful again as they couldn't register much shots on goal.

The Bruins start a busy week of hockey playing Tuesday in Philly, Thursday vs Tampa, Saturday in Washington and then back in Boston Sunday vs Ottawa.

At the end of the game the Bruins players took their sweaters and gave them to a number of police and first responders.