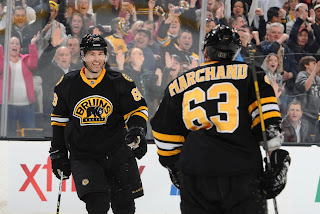 With the lack of offense during the last couple of games Claude decided to switch the lines to the following:

The Bruins started the game slow but capitalized on their few chances scoring 6 goals coming from Peverely, Marchand (2), Ference, Caron, and Horton. Seidenberg added 3 assists and Jagr and Campbell each added 2 assists. Tuukka Rask made a number of key saves allowing 2 goals on a total of 42 shots.

The powerplay woes continued as the Bruins went 0 for 2.

The Bruins were also outshot 42 to 35 getting outshot 18 to 9 in the first period.

The Bruins came away with their biggest margin of victory and most goals scored on the year, granted the opponent was Carolina, but the Bruins still didn't play a full 60 minutes, as they started the game slow, and then giving up 2 goals in a matter of a minute late in the 3rd period.

The Bruins are off until Wednesday when they travel to New Jersey and then come back home Thursday to face the Islanders, they conclude the week on the road in Carolina in a rematch of this one.