Keys To The Game Vs. Carolina (It All Comes Down to Claude)

Claude Julien finds himself once again taking heat from fans and media. Why? Because in an awful effort against the Canadiens Claude dropped Jagr to a line with Campbell and Thornton, moved Seguin back to winger, and for some reason kept the Lucic-Krejci-Horton line perfectly in tact.

Fans are mad becuase the Bruins arn't showing the effort they have in past years. And Julien isn't doing anything about it. He would rather let the lines ride and let the mediocrity continue. For example Milan Lucic only has one goal in his last twenty two games. Horton doesn't want to make contact any more and though he has been scoring a few goals, how many wide open nets has he missed? Yet Claude kept the line intact. As a matter of fact it was the only line he did keep in tact. Julien continues to keep Krejci on the line with two wingers who don't deserve to play there.

Claudes stubbornness often gets in the way of the Bruins success. Why not put Jagr with Krejci? It makes the most sense and the last thing the Bruins should do is waste Jagr's talent mucking it up on a line with Campbell and Thornton. Now, according to reports, Seguin has been dropped down to a line with Paille and Campbell. It doesn't make sense. These are needed points against a mediocre team like the Hurricanes. 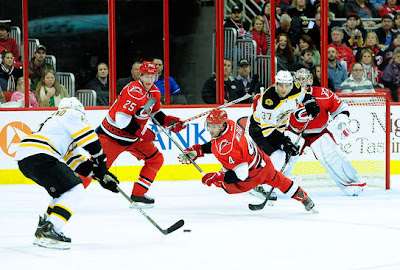 The Bruins do have one thing to look forward to though, Chris Kelly has been cleared to play. Kelly will provide some stability to the Bruins who have lost Bergeron and McQuaid. The penalty kill regains one of its prominent figures. The Bruins are starting to slowly get back their lost pieces in time for the playoff run.

But with Julien's lines the Bruins have no shot at a cup. Will he change the lines at all? It won't happen tonight as these are the predicted lines:

Lucic-Krejci-Horton
Marchand-Campbell-Jagr
Paille-Kelly-Seguin
Caron-Peverley-Thornton
The one good that comes with these new lines is that Peverley has been moved to the fourth line. He's been under performing and it looks like he's just going through the motions. Scratching him wasn't enough to wake him up. Perhaps a new home on the fourth line is. But then again, Claude will probably just move the lines back to the normal in the second period against the Canes anyway.
What do Bruins fans think the lines should be? Leave a comment below or tweet @BruinsLife. In my opinion the lines should be:
Marchand-Krejci-Jagr
Horton-Seguin-Paille
Lucic-Campbell-Kelly
Caron-Peverley-Thornton
﻿