Tonights Bruins vs Canadiens game was set up by the media to be the most important Bruins game all season. Bruins fans were buzzing on social media, through radio, and in casual conversation. The Bruins had a chance to take the lead in the North East Dvision. Not only that but this was the game the Bruins were supposed to prove themselves as a team that really can win the cup.

Well obviously they can't. Not if they keep playing like they have recently. Especially not if they played like they did tonight. 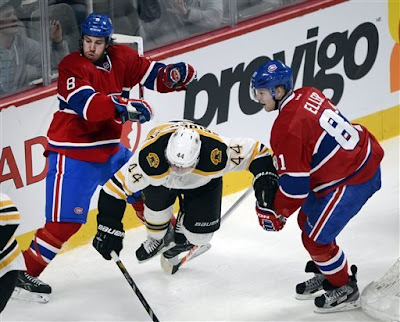 The Bruins started off sloppy and it wasn't long before they found themselves in a 1-0 defecit after Alex Galchenyuk was awarded a goal that bounced in off of Matt Bartkowski. There were not a lot of bright spots for the Bruins but there was one key bright spot in the first period. It was Milan Lucic looking physically intimadating as he hit, and injured, Alexei Emelin. While the Bruins could defenitly use some scoring from Lucic, hard hits work just as well. See the video below.


In the second period things started to go down hill. Michael Ryder scored a power play goal only 57 seconds into the second period. It was around this time conservative Claude hit the defensive panic button. Claude ended up moving Jagr to the fourth line with Campbell and Paille. He moved Seguin back to wing and put Peverley at center in between Marchand and Seguin. The new lines ended the Seguin at center experiment and wasted Jagr's offensive talent. It also didn't make sense defensivly as Jagr was on the fourth line which now meant the fourth line wasn't fully defensive.

The Bruins where not completly out of the game yet though as a Boychuck slap shot deflected off Daniel Paille and wnt in Montreal's net.

The game ended 2-1 but Bruins fans, if you missed the game, you might not want to watch the final minute. The Bruins were able to get a powerplay and pulled their goalie so it was 6 on 4. With 57 seconds left the Bruins had plenty of chances to score. So we thought. The Bruins power play did not take one shot on net during the minute. Not one shot. One player was also notably absent from the ice, not Jagr thank goodness, but Seguin. It's almost as if Claude is stuck in some strange universe where Seguin isn't the Bruins most talented player.