It's time for the fourth and final regular season game against the Montreal Canadians. Not only is it a division rivalry game but its one of the most important games of the season as the Bruins and Canadians are neck and neck for first place in the North East Division. The Canadians are in first with 53 points and the Bruins are right behind them with 52 points. A win for the Bruins moves them to first in the North East Division. A loss would put the Canadians 3 points ahead with only 11 games left after this one. 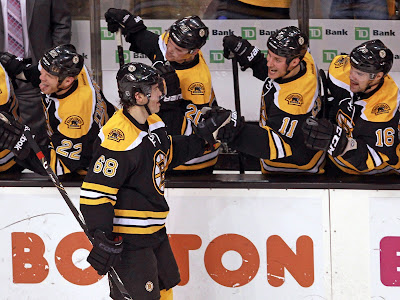 The Bruins enter the game with new fire power though in Jaromir Jagr. Jagr scored the only goal on Thursday night against the Devils in the Bruins 1-0 win. With the goal Jagr became the Bruins leading goal scorer with 15 on the season. Now the 41 year old future hall of famer will get his first taste of the Bruins-Habs rivalry.
With Bergeron still out Tyler Seguin will most likely play his second game at center. Seguin did alright for his first game at center since his days in the Juniors. Seguin at center is important to the teams success in the future but in the short term Seguin is better at wing. The line of Marchand-Seguin-Jagr were the best line on the ice though against the Devils playing extremly well. We can expect that tonight against the Habs.

1) Power Play. One of the most important facets of the game is the power play. It's an easy way to have the majority of puck time and have great scoring chances. Its not a necessary part though, as the Bruins have proved in the past few years winning the cup with one of the worst power plays in the league. But it certainly helps and with Jagr the Bruins have a threatining power play for the first time in years. With Krecji out on the ice with his NHL hero Jagr it was an exciting site to see. The most exciting power play the Bruins have had in a long time, since the Marc Savard era. A Seguin-Krejci-Jagr power play line would be great. 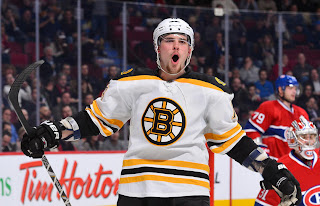 Though the Bruins probably wont be on the power play much in Montreal. Sorry Seguin, but its the Bell Centre.

2) No Bergeron. The Bruins are still without Bergeron who is suffering from a minor concussion according to Chiarelli. Luckily for the Bruins, center Chris Kelly is expected to return to the lineup soon. As of now without Bergeron and Kelly the Bruins penalty kill has to step up their game untill they get relief. Forwards Greg Campbell, Daniel Paille, Kaspars Daugivins, Jay Pandolfo, Rich Peverley, and Brad Marchand are all guys that can play on the penalty kill and play well. Against Montreal, it'll be the toughest task for the Bergeron-less penalty kill.