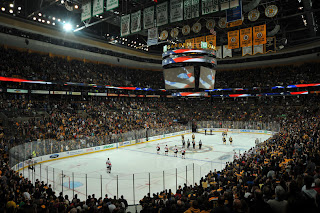 After an emotional day at the Garden where the Celtics escaped the New York Knick's rally, the bull gang went to work assembling the ice for the Bruins season finale in a game to determine most of the Eastern Conference playoff scenarios.

Ottawa scored the first two on a goals from Erik Condra and Jared Cowen. The Bruins cut the lead in half at the end of the 2nd as Wade Redden found Rich Peverley for a power play goal with seconds remaining. The Bruins tied it up to start the third as Dennis Seidenberg ripped a shot past Ottawa goal tender Robin Lehner.

The rest of the third period featured intense back and forth hockey until Ottawa broke the tie with 3 and a half minutes left. Boston couldn't find the equalizer and Ottawa sealed the deal with an empty netter sending the Bruins to the 4th seed and Montreal to the 2nd seed and North East Champions.

The Bruins will now face Toronto in the first round of the playoffs in what will most likely be a great matchup. The Bruins won the season series 3-1-0, but like we all learned this shortened season, no matchup is easy and any given night the under dog can strike.

As for the rest of the East, #1 Pittsburgh Penguins will play #8 New York Islanders, #2 Montreal will play #7 Ottawa and, #3 Washington Capitals will play #6 New York Rangers.

If the Bruins want to make a run for the cup they will need to go back to the playing style at the beginning of the season. They have to stop trying to be pretty and stick to their bread and butter, defense and grit. The Bruins have the whole gang together, and hopefully will play to their full potential.

As always, follow Bruinslife throughout the playoffs for Bruins and other NHL coverage.