Bruins Vs Senators: Keys To The Game

It's time for the last game of the Bruins regular season. The weather is getting warmer, people are cooking on grilles, and people are starting to get spring fever. Yes spring is finally coming to New England and with it comes the NHL playoffs. 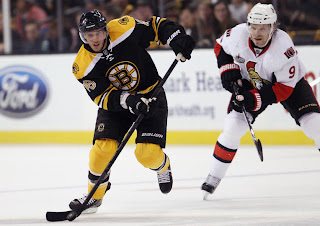 The Bruins have made the playoffs but tonight their fate in the playoffs is decided. The Bruins could end up staying in the fourth seed and facing the Toronto Maple Leafs or sliding up to second seed and playing the New York Islanders. If Ottawa wins they get the seventh seed and play the Montreal Canadiens which would be the best seeding option for them; they definitely don't want to play Pitt in the first round. So both teams have things to play for in the last game.

The Bruins will be happy to see either team in the playoffs. What the Bruins really need is to rest some of the key guys like Chara and Tuukka. Zdeno Chara hasn't looked the same in recent games simply because he's getting older. Big Z is the key to the Bruins defense and the team can't win a Stanley Cup without his leadership and strength.