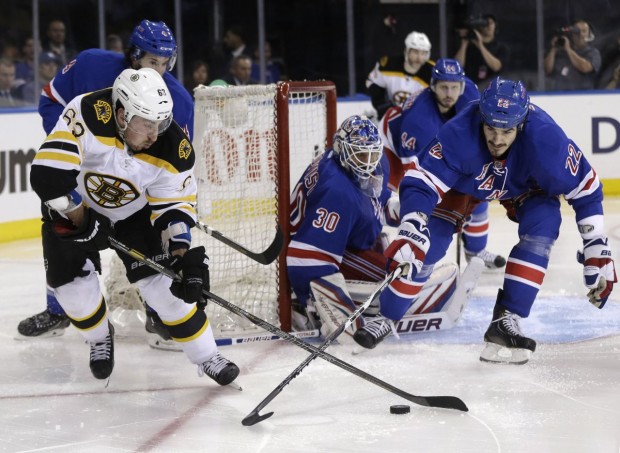 That's my assessment of Game 4. The Bruins had the game in the bag. A two goal lead courtesy of Nathan Horton scoring through King Hank's five-hole and Torey "Kruger" Krug's rising missile that picked the top corner at a wicked speed. Everything was great. The B's had survived the first period 0-0, and as they say, 0-0 on the road after one period gone, the road team is winning. Or something along those lines.

Those two goals gave me all the assurance I needed that this series was over. "The Bruins steamroll over the Rangers in four straight, await (most likely) the Penguins in the Eastern Conference Final." But no, now we all have to sit and stew with this result, digest it and puke it out, and reset our Saturday plans for a very obnoxious and annoying 5:30 pm puck drop at the Garden. Here are the few points I take away from Game 4 in Noo Yawk

Because he will get a good look at Game 5 from the 9th floor Saturday night in his best threads. I don't think there is any chance Doug (he's Doug to me until he starts playing better) plays in Game 5. Even if Dennis Seidenberg isn't 100% by Saturday, expect him to take Hamilton's spot. Hamilton was beaten on the overtime winner from Chris Kreider as he split the ice and got inside position on Doug to tip the laser pass from Rick Nash over Tuukka Rasks' shoulder. Regardless of the quality of the play between Nash and Kreider, there is no way Hamilton can allow him that space. Off a face-off in the Rangers zone and a few strides later, the deflection beat Rask and the game was over. Hamilton has to position himself better and cannot allow Kreider a chance to tip that puck. Bad, bad play.

Gotta feel for the Providence Bruins; they just pulled their own 'worst moment in franchise history' when they blew a 3-0 series lead and lost Game 7 at home vs the Wilkes-Barre/Scranton Penguins. A fact that will get lost in the annals of AHL history: both Torey Krug and Matt Bartkowski got pulled from the Baby Bruins to play for the big club, leaving the P-Bruins without two (as we can now see) NHL-quality players. And it showed down in Providence. And Krug is still showing it in Boston. Its amazing to see how well this kid plays. If one play besides his rocket-blast goal can define the hockey senses and smarts Krug possess, it was a defensive play he made in the 3rd period. The Rangers were exiting their zone looking to break, and Krug recognized it, and instead of backpedaling, he jumped past the blue line and smacked the puck right back into the zone. The Bruins changed their line and kept the pressure on the Rangers. It was an amazing thing to see Krug make such a veteran move like that in an instant. He's good. Really good.

3. One of Rasks' few criticisms rears its ugly head again
Tuukka Rask makes more than his fair share of ridiculous saves. He stones plenty of one-timers, slap-shots, wrist-shots, pucks in the crease, etc. But he has a tendency to give up soft goals. Fluky goals. Goals-that-should-not-go-in kind of goals. And we all know which of those tonight fit the description. Only about a minute after Krug ripped his slapper past Le King Henrique, Carl Hagelin skated past Johnny Boychuck and flipped a sissy backhander that deflected off Boychuck's stick. Which slowed the puck down even more. And Rask somehow caught an edge on the ice and toppled over. And the puck kept on going into the net.

"It happens to me twice a year in practice, maybe," said Rask. "I've got to be more focused, I think. Just a tough mistake. It looks pretty bad on TV, I'll bet."

That goal was such a buzz kill. It took the black and gold balloon filled with positive feelings and thoughts and stabbed it with a frozen ice pick. That started the comeback for the Rags, as the team and the crowd fueled itself off the easy goal.

The Bruins played an awesome game. They had plenty of shots, defense was solid, each line was skating, even Tyler Seguin scored a goal (finally). The power play scored twice, but you could have really counted three, as Seguin's goal came only a few ticks after the penalty expired.  But those few mishaps: the Rask tumble, Derrick Stepan picking Zdeno Chara's pocket right behind the net and slipping it past Rask to tie the game, the TOO MANY MEN ON THE ICE penalty that led to the Brian Boyle power play goal, Hamilton not boxing out Kreider on the overtime winner, were the undoing for the Bruins. Simple, easy, preventable plays. And now we have Game 5 on Saturday.

The Bruins have a tendency for playing crappy Game 5's on home ice:

Let's not see this trend continue. And this whole situation could have been avoided if the Bruins had just taken care of business Thursday night. I know the Rangers are fighting for their lives so they're playing with heightened intensity. I also know that probably 90% of the Rangers' locker room has had just about enough of John Tortorella's act and demand for bodily sacrifices playing in his system. He benched Brad Richards for Game 4 and most likely will do the same for Game 5. He called out Carl Hagelin publicly saying he "stinks." The Rangers had reached the end. Down 2-0 in the second period, you could feel the heartbeat slowly dying. And then the Rags got a shot in the arm thanks to the silliest goal you'll see all year. And now its a series again.

The Bruins have obviously been the better team this series. And Game 4 was no different. Its just those little breakdowns that turn the game on its head in a few seconds. If the Bruins can avoid those mistakes, this series ends Saturday night.