I'm sure that by this point, everyone has seen the hit that sent Johnny Boychuk off the ice on a stretcher multiple times by now. A surplus of speculations surrounding the severity of the injury left Bruins fans feeling very uneasy as they worried about "The Rocket". The first good news came out deeper into the game, when it was announced that Johnny had been moved to a nearby hospital, and had movement in all of his extremities. But the real reliever came later last night, following the game, when B's fans learned that Boychuk had been cleared to travel back to Beantown with the team.
However, Bruins fans still have to wait to see just how severe the injury to their beloved blue-liner really is.


"He was cleared to fly back with us," said Head Coach Claude Julien, following the game. '"He's still obviously injured. We don't know the severity of it and I don't know all the details, but it was an injury serious enough to bring him to the hospital. Definitely, it's going to be a little while before he's good to go. I don't know exactly how much time, but the good news is he's coming back with us tonight and he'll be reassessed by our doctors back in Boston." 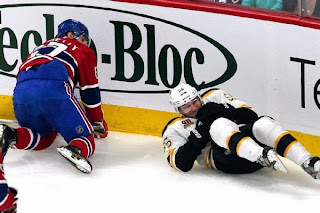 Well obviously he seemed like he wasn't able to move,"Julien said. "Whether it's his back, I don't know exactly. I don't like to comment on things I don't know much about and give false information. He's coming back with us and no doubt tomorrow we'll have a clearer explanation and probably more details from our own doctors".

Julien also had some praise for the staff that assisted Boychuk in Montreal.


"They did a great job here, took good care of him. He saw the specialist and he cleared him to fly back with us, so we'll see how he is."


The Bruins have have been put into a rather uncertain situation when it comes to defensemen of late, but Claude Julien has remained confident in the Bruins defensive depth, including recent call-up Kevan Miller, who may stage a return for the B's.

"We've talked about it all year and it's about using it (backup from Providence) when you need it," said Julien. "[Miller has] been good and [David] Warsofsky is down there and he's good as well. There are some players we feel comfortable with, if we need them, they can come up."


Depth is a very important building block in the Bruins organization. Bruins forward Jarome Iginla  commented on the confidence the B's have with the youngsters, and reinforcements:

"That's a big strength of the organization, is the amount of depth," Iginla said. "The guys who can step into the lineup, but also the guys who are already in the lineup that can handle more minutes. We have a lot of young guys that are very good, very poised. Whether Torey Krug or Dougie Hamilton have to play a lot more tonight, or Bart, they can handle that. Millsey's come up and played for us, and defense is usually a position that the older you get and being a veteran is definitely a plus."

"It's a huge strength and hopefully Johnny won't be out too long. It is something, just being here a few months, being able to see all the depth is definitely a big strength."

Tuukka Rask has also experienced this depth, crediting Bruins GM Peter Chiarelli for his ability to upkeep it:

"Well, you need that if you consider yourself an elite team," Tuukka said. "When guys go down, you need guys to step up. So far it's been good. We've had some good guys step in for injured guys and it's a lot of credit for Peter and his staff to keep it going that way."


Only time will tell how long it will take for Johnny Rocket to return to battle, but the Bruins depth will be able to cover for him until then.