Bruins Vs Rangers: Keys To Game 1

After Monday nights thriller against the Maple Leafs the Bruins are ready to try and tackle the New York Rangers. It's hard to tell what we will see from the Bruins this series. As Claude said we are a "Jekyll and Hyde" team. One thing we can expect? Obnoxious New York sports fans and Tort's giving media great sound bits. Wouldn't it be great to hear Micheal Felger and John Tortorella go at it? 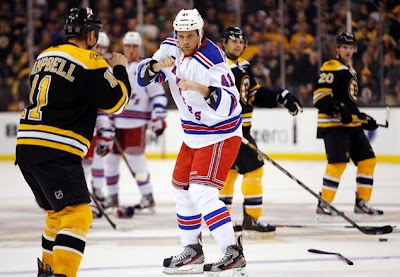 The Bruins are looking at their toughest playoff match up since the cup. They face a team that looks like they really over power them as the Rangers have high end talent, en elite goalie, and they also pack it in front of the net.

The Rangers seem to be Claude Juliens ideal team. Claude would have a wonderful time trying to keep the game 0-0 for as long as possible and then put out the energy line for a game winning goal and then some fribbles at Friendly's afterwards.

Brad Marchand will be "fine" for game 1 though he sustained a injury in the morning skate.