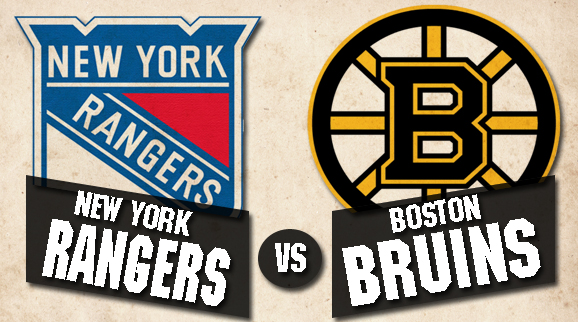 The Bruins pulled off another overtime win Thursday night, taking Game One from the Rangers, in their first playoff match up since 1973. At the start of each game, both teams seemed to sit back a little bit, and feel each other out. The desperateness wasn't there, and it showed on the score sheet.
That being said, each team was playing well, but was just being cautious, trying to be very careful not to make the first mistake. As a result, this had the buildup of being a low-scoring, close game, and it was. For the first half of the game, both goaltenders seemed very solid, which was a theme that stuck throughout the entirety of the game.
Twelve minutes into the second, Boston struck first, after a Zdeno Chara slap shot wiggled it's way past Lundqvist, and was put in the net by the veteran goaltender. The Bruins held that lead for the remainder of the period, most of the second, until the Bruins' inability to clear the puck resulted in an outstanding shot from the point by McDonagh with 1.3 seconds remaining in the second frame.
The tie would be broken up immediately in the third, when Derek Stepan slipped a puck past Rask on a shot from the high slot just 14 seconds into the third (amounting to two goals in just over 15 seconds, being split by the intermission). The Bruins had a quick response up there sleeve too, when the Livonia, Michigan native Torey Krug fired a slap shot past Lundqvist in his first career playoff game, knotting the score up at 2 with a power play goal.
Johnny Boychuk was almost the producer of another historic game winning goal, when he teed up a Johnny Rocket that ringed off the post with just a tenth of a second left in regulation. So the game went on to overtime once again, and despite having a great-looking power play that produced eight shots, and hitting four posts in the end of the third and overtime combined, the Bruins could not produce a goal. They dramatically out-shot the Rangers, particularly at the start of overtime, however, Lundqvist didn't let one slide in. Rask, although taking less shots, was very solid 178 feet away.
Then, almost 16 minutes into a thrilling overtime, Patrice Bergeron (surprise surprise) carried the puck into the Ranger's zone, alongside Brad Marchand. With some great skill and determination, Marchand managed to slip through the defense, while Bergeron drew his man over. The alternate captain, who is up once again for the Selke, slid a great pass over to Marchand, who found only Lundqvist between him and the back of the net. Marchand tipped Bergeron's pass by Lundqvist, and ended Game 1- Final Score: Boston: 3, New York: 2.