That's Why It's a Best of Seven Series 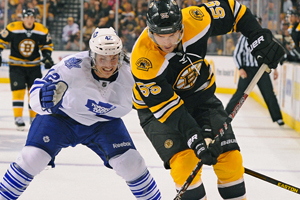 Almost 24 hours has passed since the Maple Leafs evened the best-of-seven series at one game apiece at the TD Garden. And now the Bruins and their fans have a much different feeling than what was late Wednesday night. All the good vibes from the 4-1 smack-down (shouts-out to the vintage 2011 reenactment put on by the hockey club) came crashing back down to Earth right when James van Reimsdyk squeaked the puck past the one inch of space between Tuukka Rask's spread eagle and the post. I think I saw Kaspers Daugavins curse the Hockey Gods for the double-dib of losing the game and seeing someone else beat Rask on a circus shot.

Now the Bruins face a huge problem. And that problem is called the ACC: The Air Canada Center.

Its been mentioned ad nauseam , but in case you didn't get the memo, the Maple Leafs have not been in the playoffs since 2004. The Red Sox still hadn't broken the curse. Facebook was 3 months old. And Gary Bettman was gearing up to ruin the lives of millions of fans for a whole year.

The point is, the Maple Leafs fans will be off-the-wall-bananas from the pregame ceremony on. A tidal wave the size of an 8 year playoff drought will be unleashed when the Leafs take the ice. And when the Leafs put a puck past Tuukka, the decibel level in Toronto will be astronomical.

But this is why its a seven game series. Each game is different. The first two are clear examples of how quickly things change. Teams rarely roll through any series in four or five games (LA Kings not included).

The difference between how the Bruins played in Game 1 and 2 is night and day. Game 1 saw the pinnacle of their game: hitting everything that moves to open up space for shots, a defensive unit that had very few mishaps and shut down the Leafs offense, and all four lines flying at top speed and grinding the Leafs to a pulp, making them look like the did not belong on the same sheet of ice. Game 2 saw the reserve, as the Leafs brought it to the Bruins and flipped the tempo of their game 180*. They played with toughness, speed and smarts. And they got what they wanted. Let see what goes down come 7:00 pm.