Bruins vs Hurricanes: keys to the game 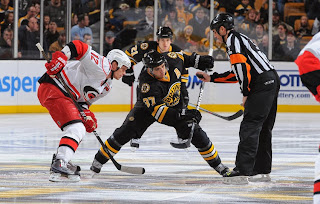 The Canes' have been rebuilding their team over the past few years. They traded for Eric Staals brother Jordan Staal. Of course last season the Canes' acquired Alexander Semin the "coach killer". Another successful addition for the Canes' is an old familiar face from the Buffalo Sabres. Nathan Gerbe. Gerbe has 5 goals and 5 assists so far this season.

1) Depth. The Canes' are actually starting to build some depth during their rebuilding process. The Canes' have some decent depth now which they can use against the Bruins who are known around the league as a very deep team. The Bruins bottom lines are going to have to out play the Canes' bottom lines.

2) Defense. Tim Gleason is the best defensive player on the Carolina Hurricanes. But him and Justin Faulk are the only good defensive players on the team. The Bruins should be able to exploit the Canes' defense otherwise.