Bruins vs Rangers: keys to the game 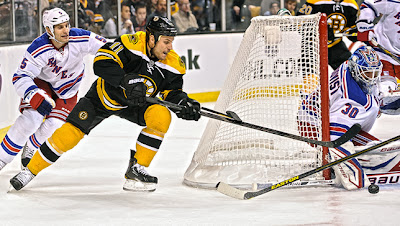 The Bruins are coming right off of a win to a game against the New York Rangers. The Bruins beat the Canes' 4-1 last night in North Carolina and now are in New York to play a Rangers team who have been sub par.

The Rangers are a mediocre 10-10-0 since they fired John Tortorella in the off season and signed Alaine Vignault to coach their team. Of course Vignault was on the other bench of the 2011 Stanley Cup Championship game coaching the Vancouver Canucks. So the Rangers did sign someone who has bad blood with the Bruins making this game very interesting.

What makes the game even more interesting is that Rick Nash will be coming back for the first time in 17 games tonight. Nash has been out with a concussion over those games.

1) Lundqvist. Henrik Lundqvist is one of the best goalies in the game today. Or at least, he was the best goalie when Torts made all his defensemen dive down and block shots. So this season with a more offensive minded coach? Lundqvist is 6-8 with a 2.41 GAA and a .919 save percentage. The Bruins have been able to pick apart Lundqvist weaknesses before and now he has no help.

2) Grind Game. The Bruins are going to be fatigued after playing last night. We have seen it before this season. The Bruins need quick shifts so they dont get caught out on the ice for to long. If they do then the Rangers will be able to take advantage of them.