Considering the fact that the B's have been missing two of their top defensemen, and have still managed to play very well, holding up the first spot in the East has been pretty impressive. The Bruins have won eight of their last ten games (three of which have been won by 3 goals), and tallied one OT loss, and just one regulation loss during the streak.
And things are looking even better for the B's, since D-Man Dennis Seidenberg hit the ice for the first time since being injured in last Tuesday's game against the Rangers. Seidenberg is expected to return to game action soon, as his "lower body injury" seems to be healing on time.


"Yes it was his first time out there today,"said Head Coach Claude Julien. "He skated earlier this morning and then he skated with us, and he’d been on for 45 minutes so we just got him off." 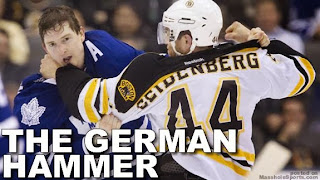 The other Bruins defenseman nursing a lower body injury (sustained November 9th against Toronto), Adam McQuaid, has been practicing with the team, who may return to action as soon as Tuesday night.


"Yeah, he’s getting closer," said Julien. "He’s been skating and again, I haven’t talked to our trainers yet as far as how he felt this morning but I think there’s always a possibility I have to make a decision tonight on if he is playing or not."

When asked if he needed another day off, McQuaid responded:


"We’ll see," said the soft-spoken defenseman. "I am getting close. I feel like every day it’s been improving and I’m definitely getting close right now so I’m excited about that." "It’s feeling better now so I’m hoping that when I get back, it’s not really going to be something that bothers me too much."

Hopefully both guys will return to action soon, however, the Bruins have been fairing quite well in their absence. As we've seen before, the Bruins have a lot of young defensive talent, including Matt Bartkowski, Dougie Hamilton, Kevan Miller, and of course, Torey Krug.

For more on McQuaid, check out the video below: