'Twas the game before Christmas and all through the rink...

Naw, we'll leave Christmas Carol parodies to jolly folks like Weird Al and Ron Borges, though the Boston Bruins certainly were in a giving mood - particularly young Ryan Spooner, who delivered biscuits in front of the basket Monday night in Nashville like they were presents under the tree... 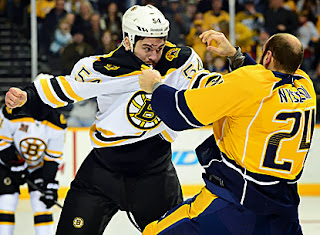 ...assisting on three goals, one of three Bruins to enjoy a three point night and one of ten that showed up on the scoresheet as the Bullies from Beantown left a lump of coal in the Nashville Predators' metaphoric Christmas stocking - actually a half dozen of them - routing the Predators by a score of 6-2.

The match was essentially over midway through the opening frame, Jarome Iginla, Matt Fraser and Reilly Smith lighting the lamp in a frenzied scoring barrage so quick and and unrelenting that Nashville starting goalie Carter Hutton was pulled in favor of Marek Mazanek less than six minutes in.

But not until Bruins' defenseman Adam McQuaid and Predators' left wing Eric Nystrom exchanged early gifts with each other, tasteless as they were, the knuckle sandwiches treating the fans to perhaps the most spirited fight of the holiday season - Nystrom going to the box and McQuaid, who had just returned from a nine game hiatus with groin issues, going to the room to repair a leak above his right eye.

Both returned after the mandatory five-minute time out no worse for wear, and then the true beatings began.

Hutton gave up soft goals to Iginla - a tip in off of a Chara drive - and snap shot in which he gave up a huge rebound that found Fraser in the high slot for his first goal as a Bruin, then he stormed off the ice like disgruntled child that got a sweater instead of a Skylander video game.

Mazanek's luck wasn't much better initially, allowing a tough-angle power play wrister to Smith, but was much more alert than his predecessor and stopped the bleeding after that, stopping 25 shots between Smith's goal and when the skids fell off the sleigh in the third period.

The lone scrooge for the Predators - besides Nystrom - was center Craig Smith, who single-handedly made things interesting, slipping a few lumps into Boston netminder Tuukka Rask's stocking, making the score 3-2 just three minutes into the final frame before Iginla and Carl Soderberg found twine 49 seconds apart to blow the game open...

...Brad Marchand sending the Nashville crowd home with a nasty just-ate-some-of-grandma's-fruitcake taste in their mouths late in the game with his eighth of the year to complete the blowout.

The Bruins' 25th win of the season and the two points that came with it were stocking stuffers - the big gift under the tree is the incredible depth that the club is showing off in the face of injury and suspension, players like Ryan Spooner and Matt Fraser joining newcomer Reilly Smith, combining with the solid veteran core to form as good a team as there is in the National Hockey League.

The next chance the Bruins have to show off their depth is not until after Santa delivers his loot, beginning a home-and-home series Friday night in Ottawa, the back end of the series at TD Garden in Boston the following evening.