Bruins vs Predators: keys to the game 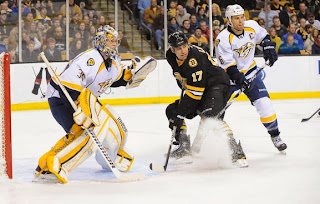 The Bruins are in Nashville tonight to play a team that we rarely get to see, the Nashville Predators. The Preds are last in the Central division and are without their star goalie Pekka Rinne. To say the least, the Preds season is in jeopardy.

So for the second game in a row, the B's will be facing a team last in their division. With out Rinne the Preds are sinking. Their forwards dont really score and Shea Weber is the key to their entire defensive success. It could turn out be a good rebound game for the Bruins.

If the Bruins roll out all four lines and they play well then the Bruins can get past the defensive god of Shea Weber and attack the Preds weaker defensemen.

2) Hutton? Mazanec? Who?: With Rinne out with his injury the Preds are starting backup goalie Carter Hutton and have a rookie goaltender, Mazanec, backing him up. The Bruins are facing the Preds and wont have to be shooting the puck on a net that has Rinne stopping everything. If they cant take advantage of that then, well, there would be problems.