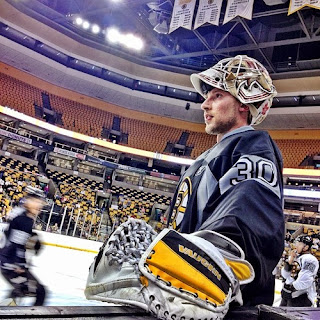 Boston goaltending came under question when the star of the 2011 team, Tim Thomas, decided he wanted to take a break from the NHL in 2012, leaving a rather untested Tuukka Rask to fill the role. Well, as we all know, the goaltending question was quickly answered, as the Finnish netminder was certainly up for the challenge. The Bruins found faith in their backup goaltender too, Anton Khudobin, who stood tall in quite a few appearances for the B's last season.
But over the off season, the successful backup left the team, and with it, the confidence that Tuukka Rask could get a break once in a while was dying. The Bruins looked to Chad Johnson to fill that role, through an off season signing that was a bit overlooked, due to it's close timing to the successful Jarome Iginla inking.
I'm not sure that many people knew what to expect from Johnson, but I can assure you now that they are pleased with the backup netminder. Despite making only five appearances thus far for the B's, Johnson has gained the trust of both the organization, and the fans. After Saturday's 3-1 victory over the Blue Jackets, Johnson has improved to an impressive 4-1-0 record on the season, while sporting .918 save percentage, and a 1.97 goals against average.


“Yeah, it was an easy game," the 27 year old goaltender said after defeating Columbus. "Not really much to talk about on my end of it. I think the last couple of games have been like that. I don’t get a lot of action. Last game I played I had some in the third so, yeah it’s tough to not really see any action in my end or any shots so you just try and stay as mentally sharp as possible and just try to stay into it.”


Although Johnson feels he hasn't seen much action, the pleasing stats, boosted by the solid 4-1 record has installed plenty of confidence in Claude Julien:

“When you look at his win/loss record, it’s exactly what you would like to see from your backup goaltender," said the veteran Bruins Head Coach. "He’s played a little bit more so he’s definitely feeling a little bit more into it and seemed more confident. He made some good saves, even though he doesn’t get tested much.


I think we all know that that’s an even tougher task for a goaltender when you’re sitting there and not getting many shots to stay focused, stay into the game. He did a good job of that.”


Make no mistake, being a backup goaltender in the National Hockey League is by no means an easy job, but Chad Johnson has made it look that way thus far.