Nick Foligno snapped after what by NHL standards, was a routine hit by Dennis Seidenberg. Foligno was so outraged by the hit he dropped his gloves and challenged Seidenberg to a fight. Of course with a 2-0 lead Seidenberg refused so the refs stepped in. Then Foligno continued to go after Seidenberg and even grabbed Seidenberg's sweater. After trying to pull Seidenberg to the ice, the refs gave Foligno a 10 minute misconduct penalty.

What Foligno was doing, no one really knows. He might have been just trying to pump his team, or, he might have actually just snapped and wanted to fight Seidenberg. Does it matter though? Not really. Columbus continues their run at irrelevancy. 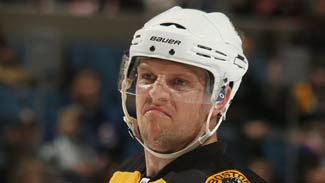